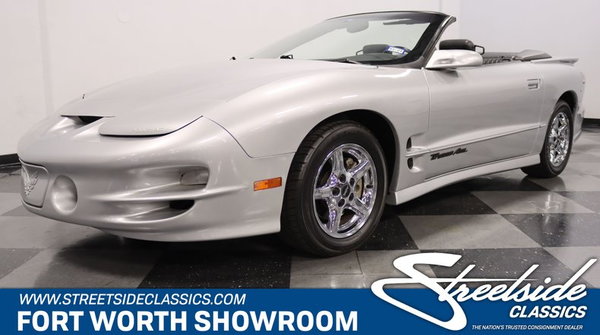 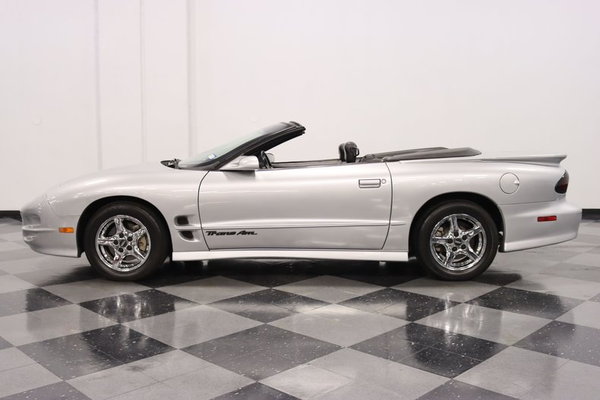 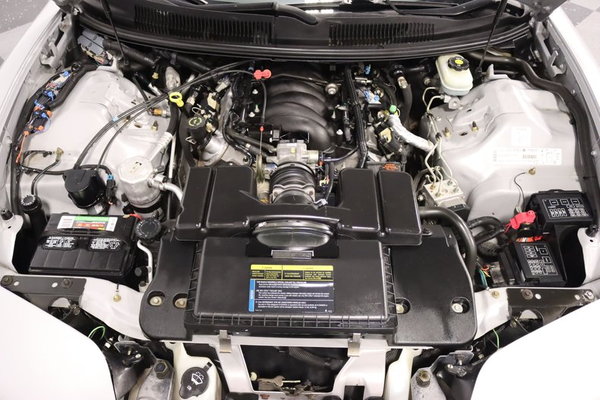 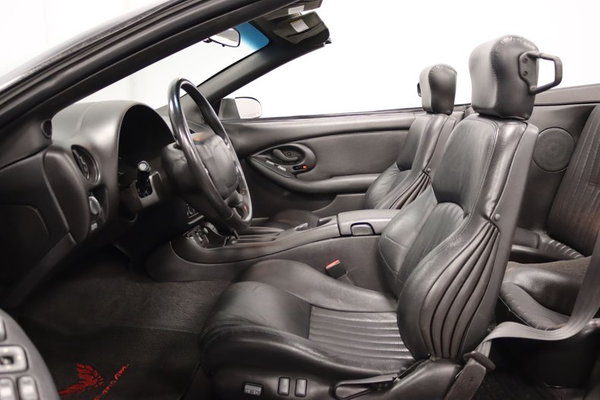 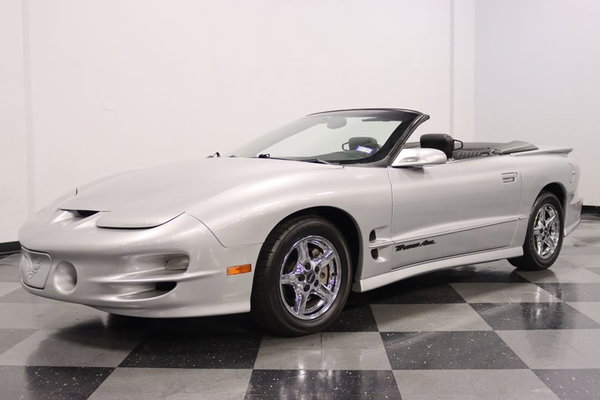 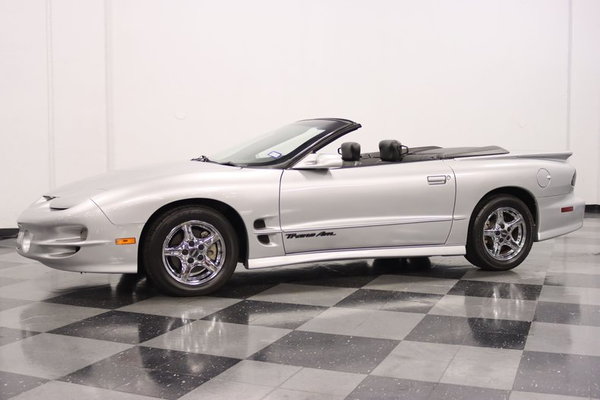 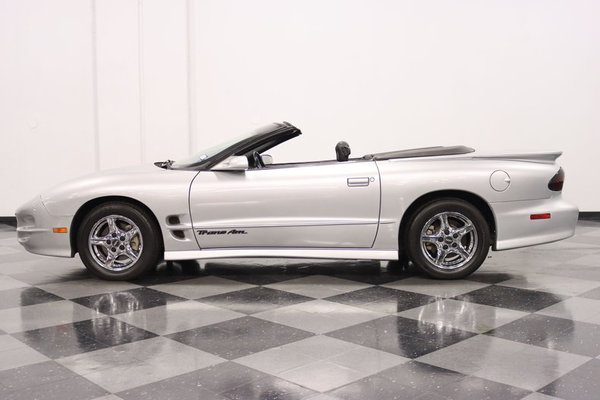 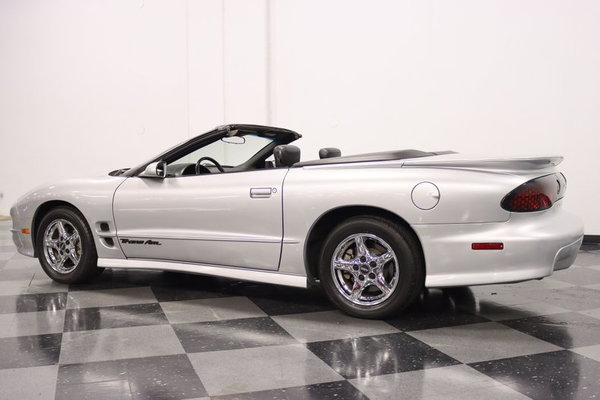 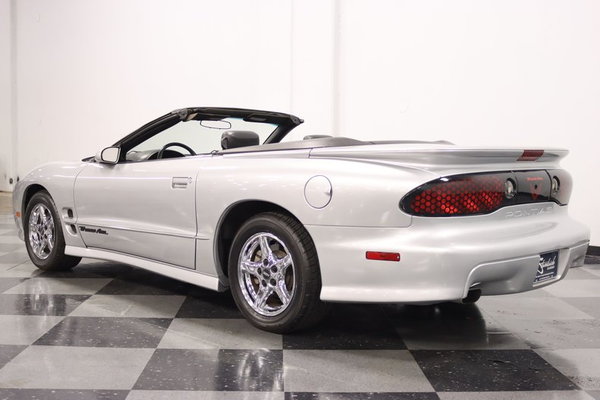 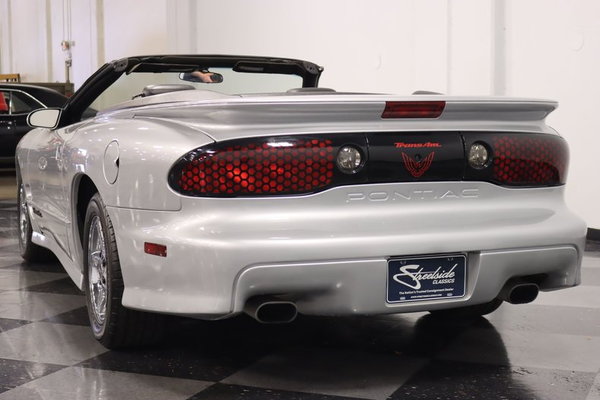 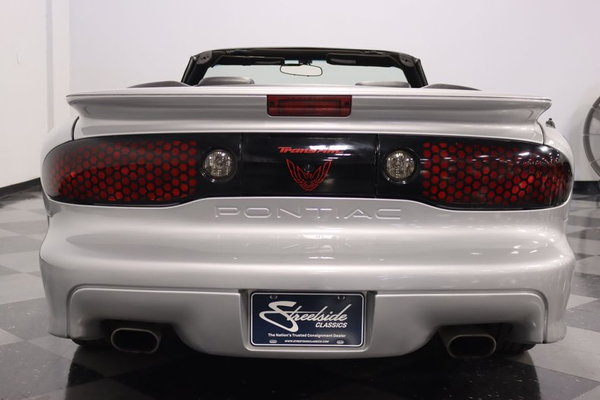 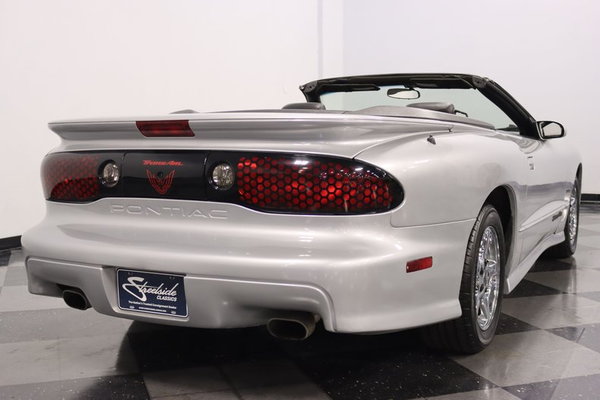 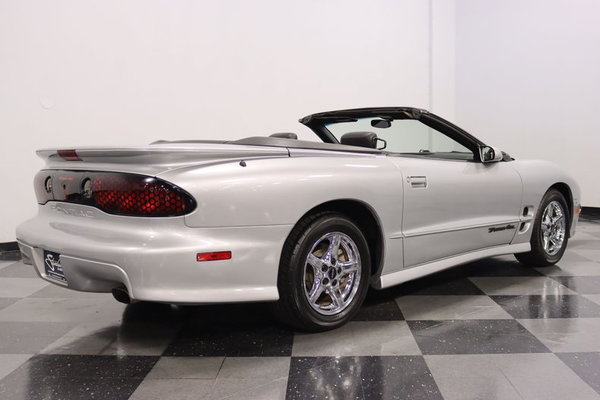 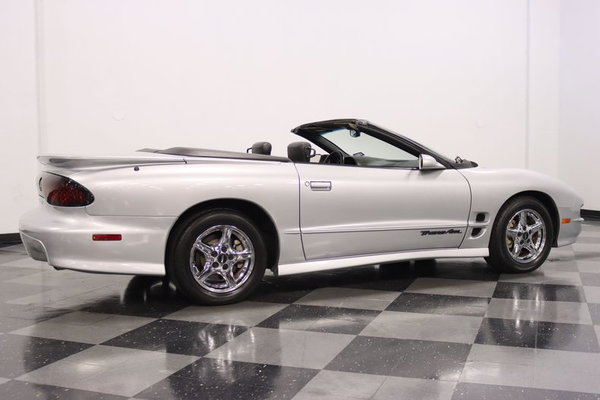 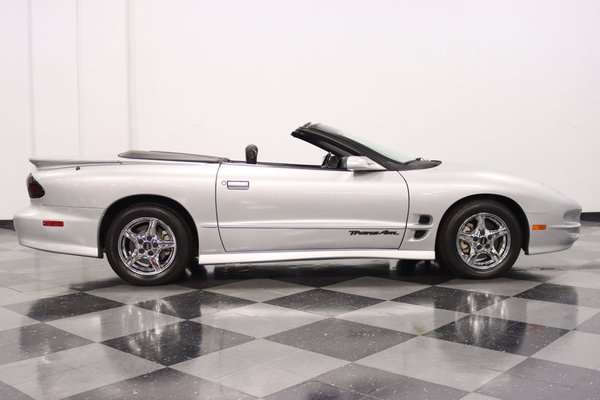 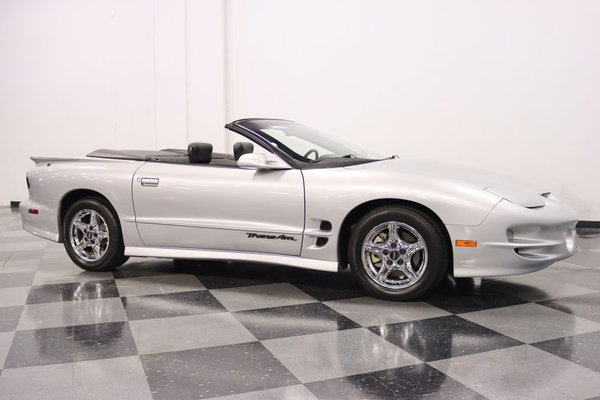 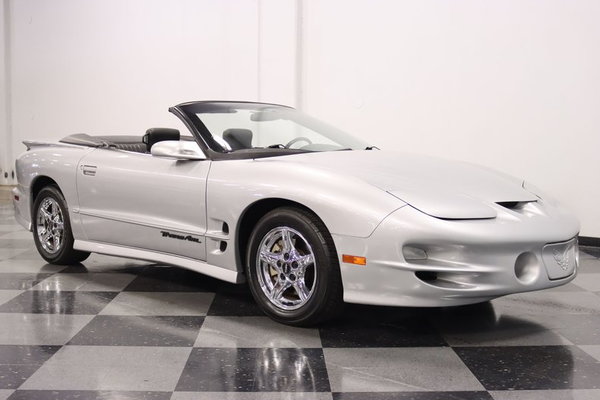 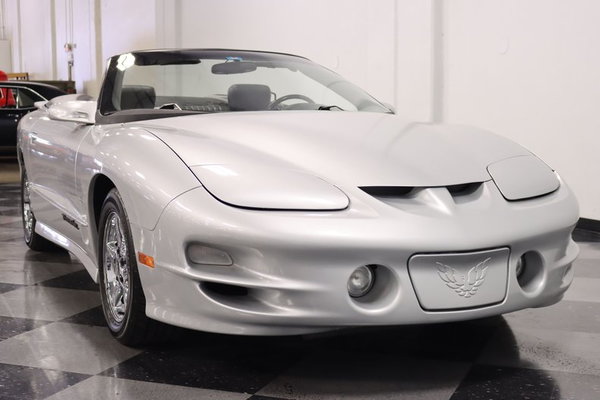 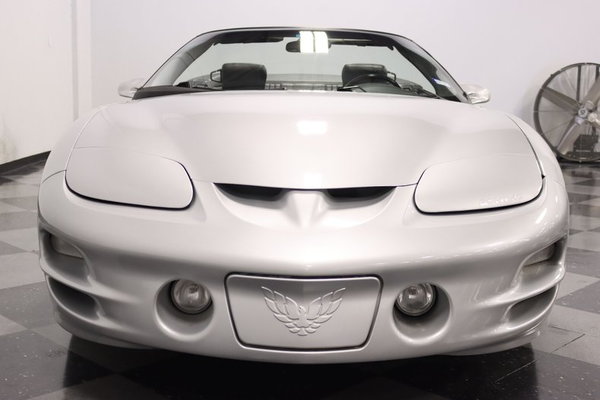 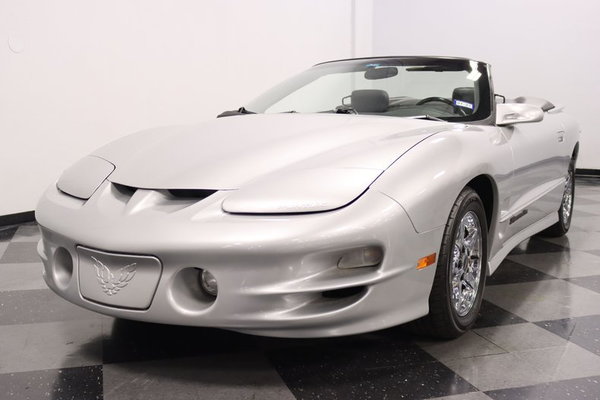 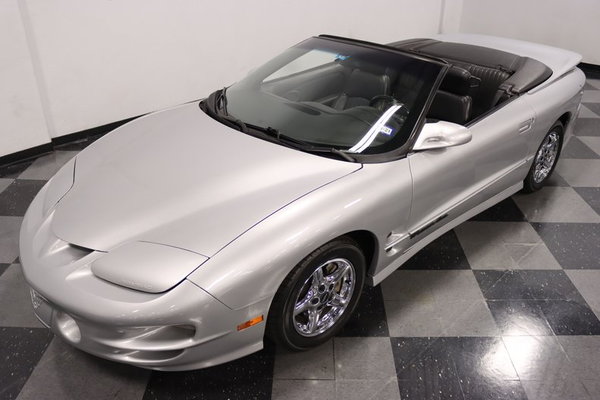 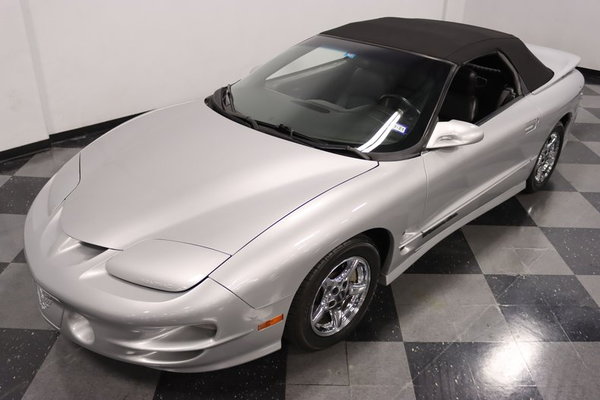 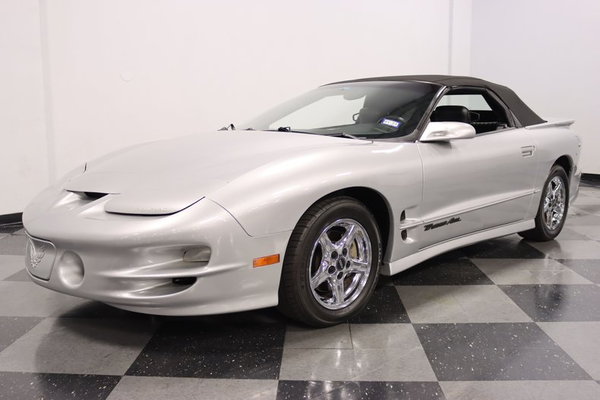 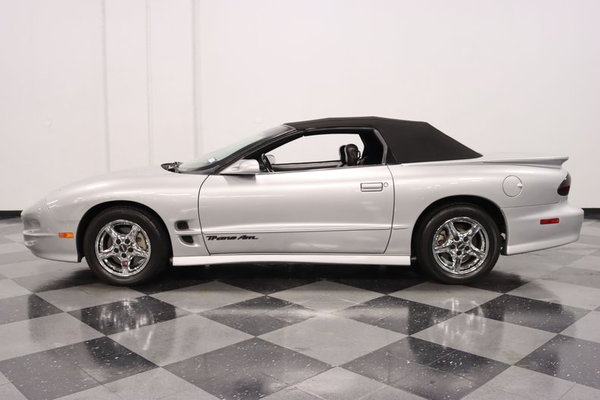 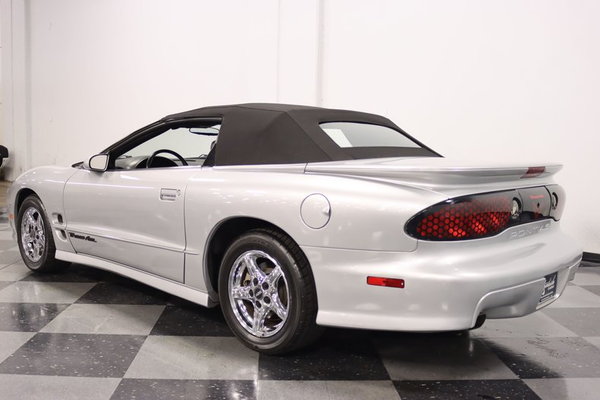 $28,995
Get Financing >
14928 miles
Ad Number: 184319036
Report this ad
Fort Worth, TX, US
No trades accepted
Streetside Classics-Dallas/Fort Worth (Business Seller) RJ Storefront
Share
Save
Msg.
Call
Item description
We all know that big horsepower and small price adds up to lots of fun, but few cars delivered the bang for the buck of the late-model F-body. This 2002 Pontiac Firebird Trans Am convertible is one of those rare unabused specimens and shows just 14,928 miles (WOW!), so you know it was never a daily driver. If you missed your chance twenty years ago, here it is again!

There's no mistaking the fourth-generation Trans Am, with its twin nostrils force-feeding the barking LS1 V8 underneath. Finished in slick Bright Silver Metallic, which is still one of the best colors for a Trans Am, it looks like a predator even after all these years. Still as shiny as the day it was new thanks to a clearcoat reapplication finished not long ago, this F-body has been properly maintained and shows little evidence of having been driven aside from the usual polishing marks that are pretty much inevitable with bright paint on a sexy car that gets washed a lot. There are almost no scuffs on the chin spoiler from steep driveways, no chips in the windshield, and even the Trans Am's ultra-aggressive nose is virtually free of blemishes, with only a couple minor chips that should be expected. Not perfect, but pretty darned nice everywhere you look. Heck, even the GM factory paint jobs in the early-2000s weren't exactly show winners, so the minor fisheyes and even slight orange peel (which seems to be mostly found on the decklid) is understood, but regardless, to the naked eye this T/A looks amazing in person. Trademark round fog lights, black Trans Am badges on the lower doors, the trademark honeycomb taillights help identify what was ultimately a very sophisticated package. There's also a large integrated wing out back, plenty of scoops, flares, and vents in traditional T/A fashion, plus a top that goes down and instantly turns this baby into an open-air cruiser.

Black leather buckets are the perfect choice for this silver bullet, and they naturally remain well preserved in this low-mile Trans Am. The supportive bucket seats are both grippy in the corners and comfortable for all-day drives. Usually, these cars start to show wear on the driver's bolster, and although there are some minor comfort marks it's clear that someone was exceptionally careful whenever they got in and out of the car, because it's still quite nice. Carpets, door panels, and the dash are great, and it appears that the back seat has never been used. All 2002 Trans Ams had round A/C vents and orange lighting on the dash, giving it a very high-tech look. And all Trans Ams came only one way: loaded. That means A/C, power windows, power locks, cruise control, traction control, ABS, and power seats, plus keyless entry. Everything works as it should on this one-heck, even the floor mats look like they were just installed recently. A powerful Pontiac Monsoon AM/FM/CD stereo with equalizer sounds awesome, even at full bore with the top down, but at that point you'll probably want to enjoy the V8's song anyway. And speaking of that convertible top, it's black canvas with a clear glass rear window and it is brand, spanking new.

The 5.7L LS1 V8 engine became famous overnight, and anyone who worried about the passing of the small block torch need not have been concerned. Its aluminum construction shaved precious pounds from the nose of the car, while it cranked out more power than any small block in history. Almost completely untouched, the engine bay of this car is like an anatomy textbook for future restorers, with original markings, fasteners, and decals in 100% factory fresh condition. Even the intake and exhaust system is bone-stock, and the soundtrack is fantastic. The 4-speed automatic snaps off quick shifts, but this is still a great cruiser and the LS1 can pull down more than 20 MPG on the highway (if you can somehow manage to keep your heavy foot out of it). Underneath, it's obvious that this car has never been mistreated and it wears factory chrome wheels wrapped 245/50/16 blackwall radials.