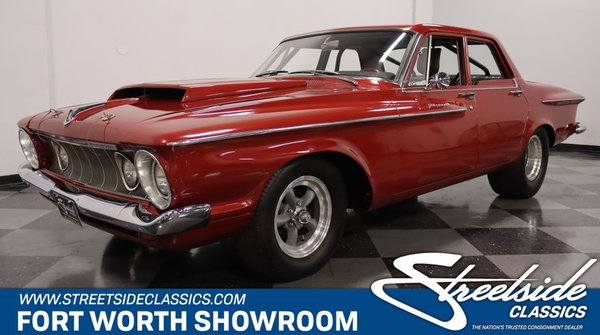 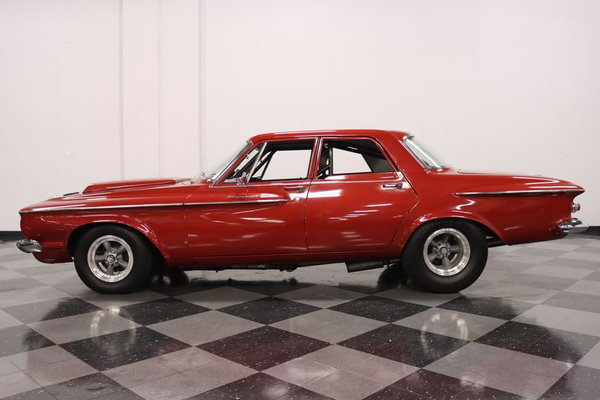 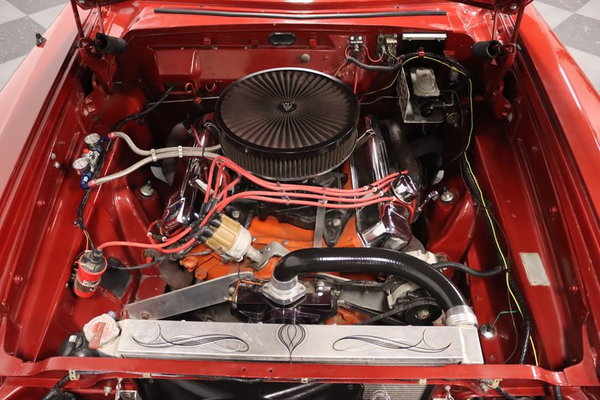 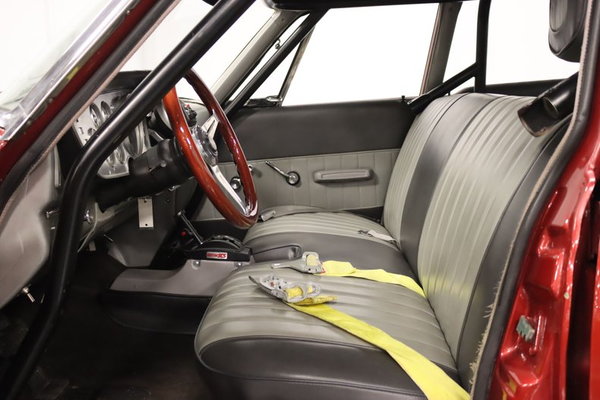 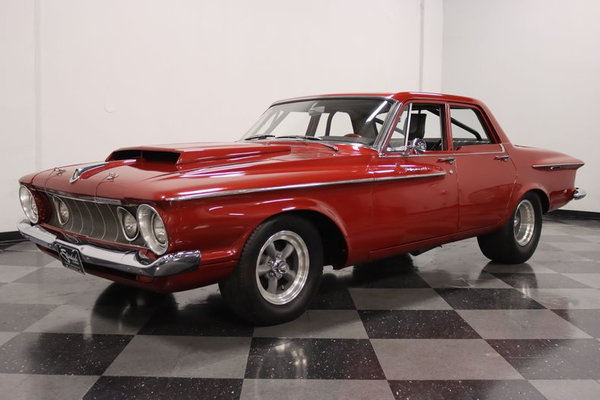 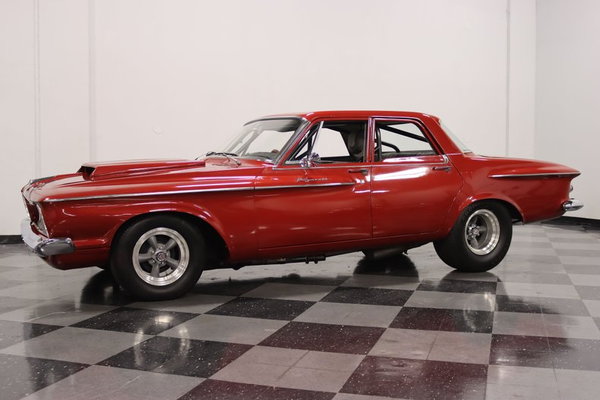 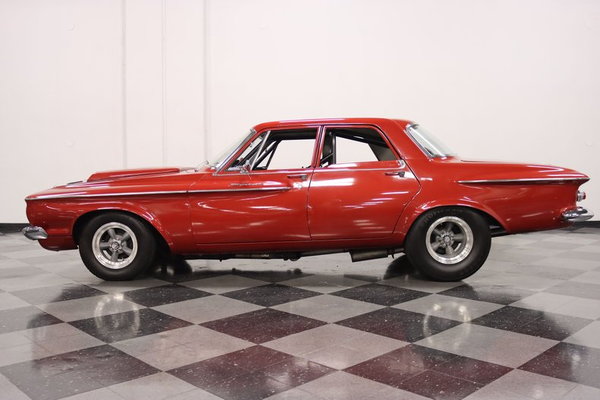 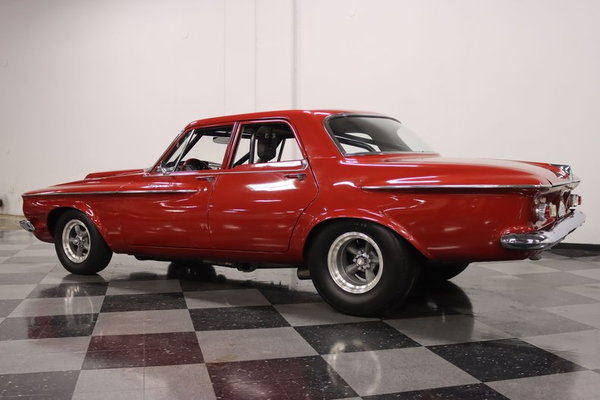 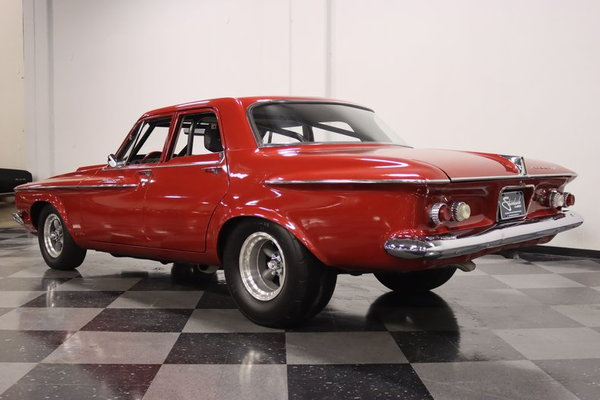 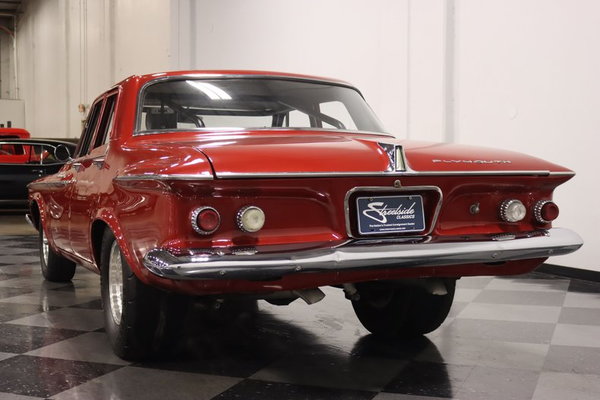 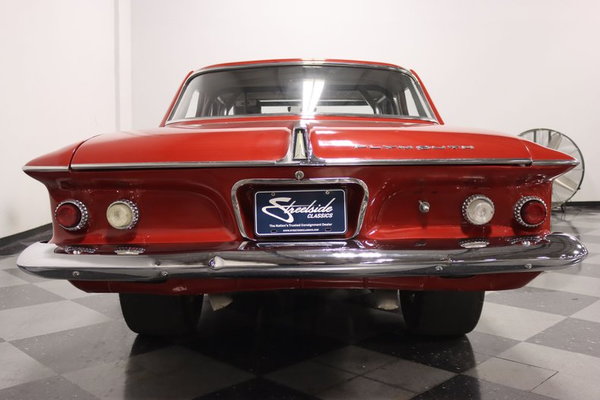 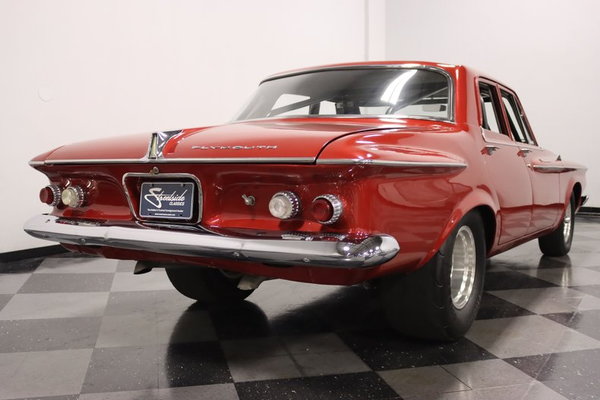 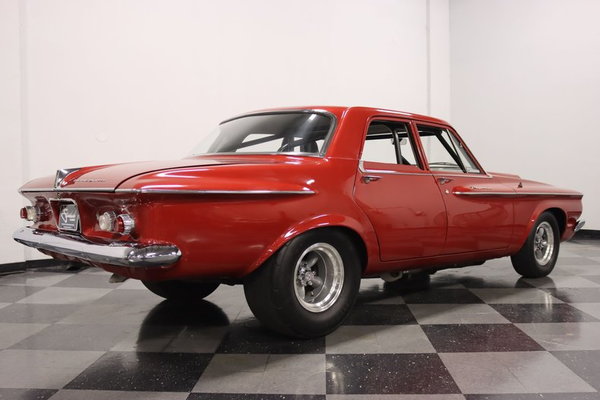 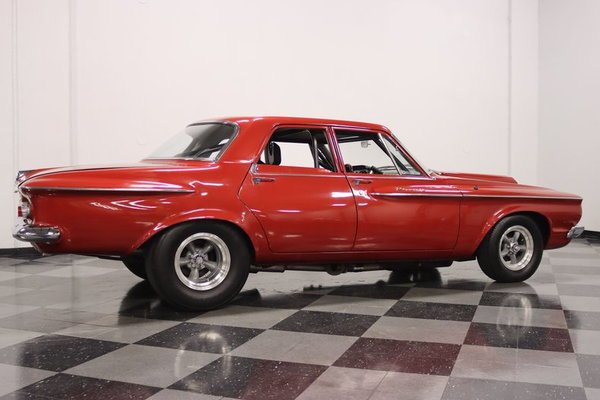 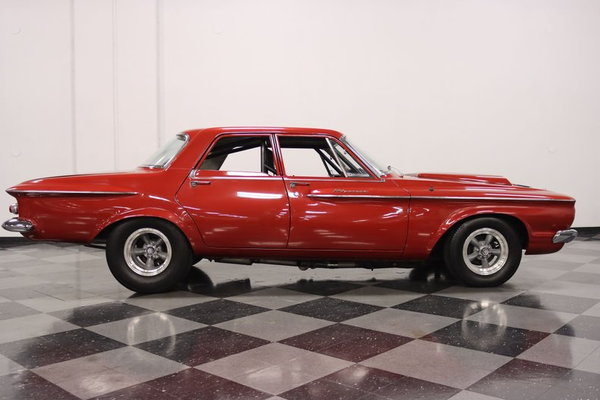 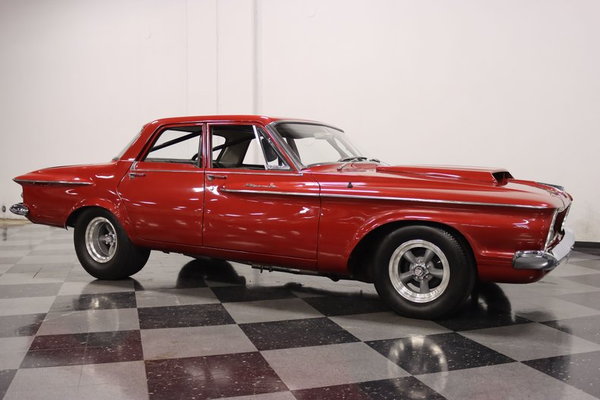 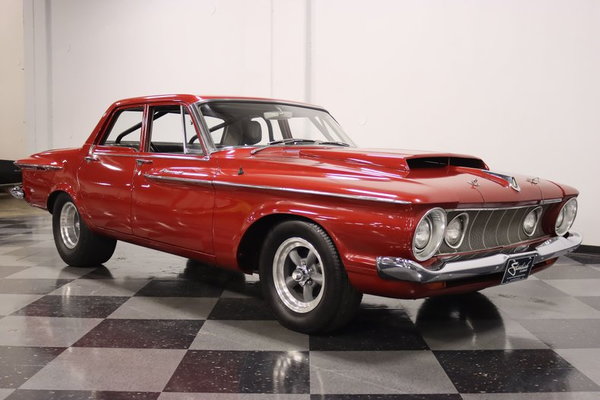 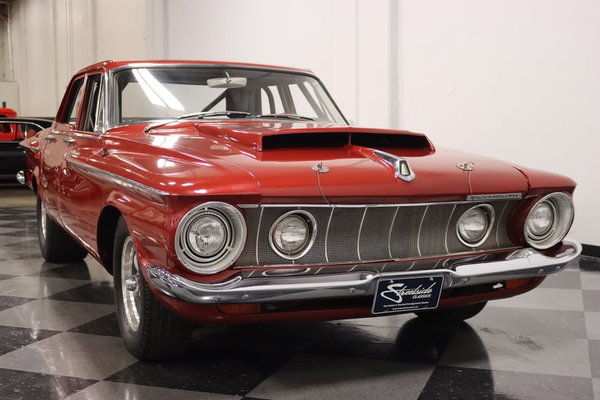 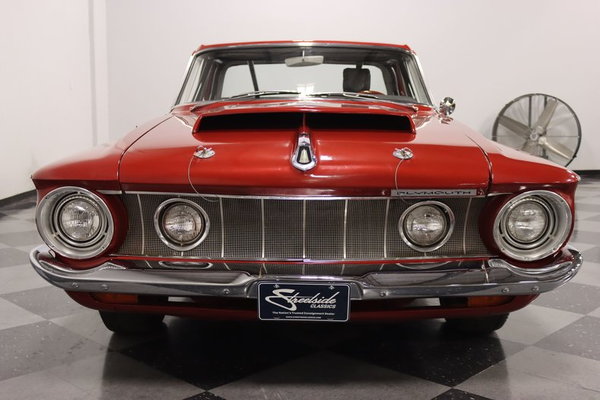 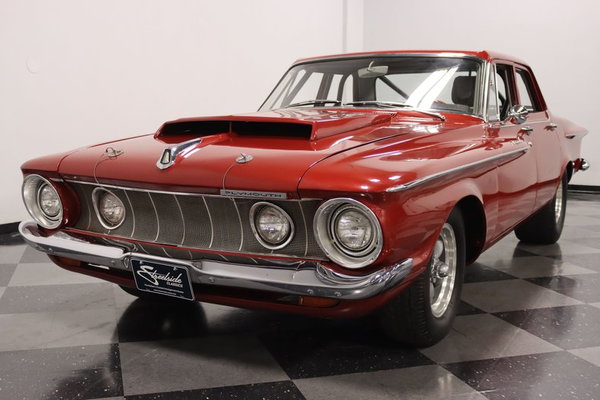 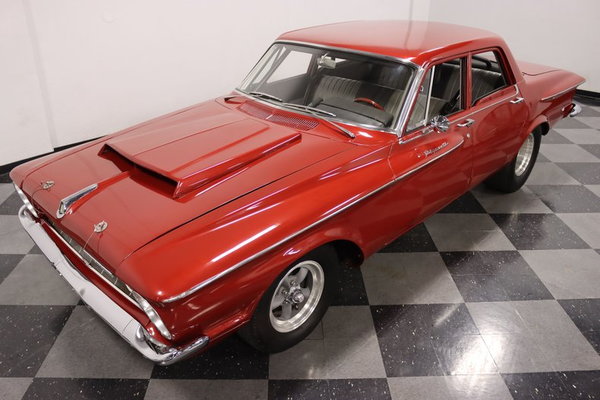 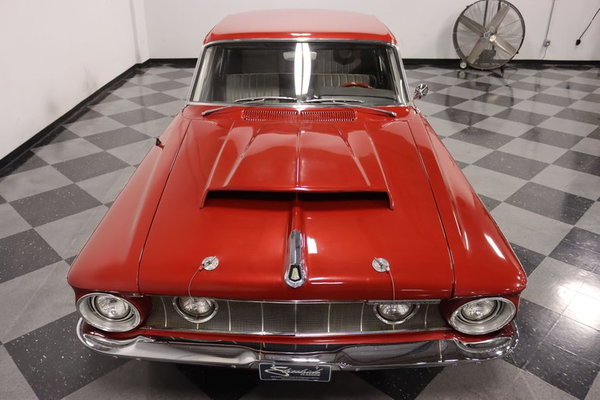 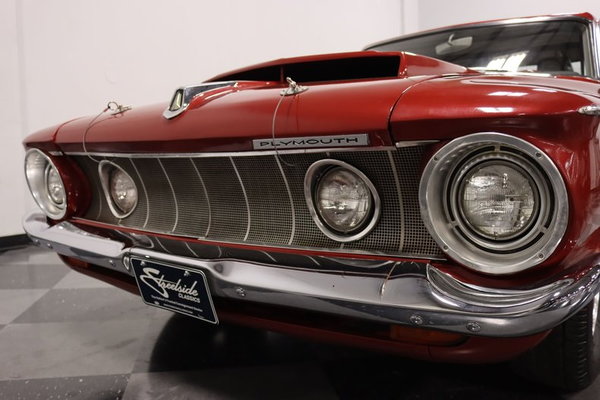 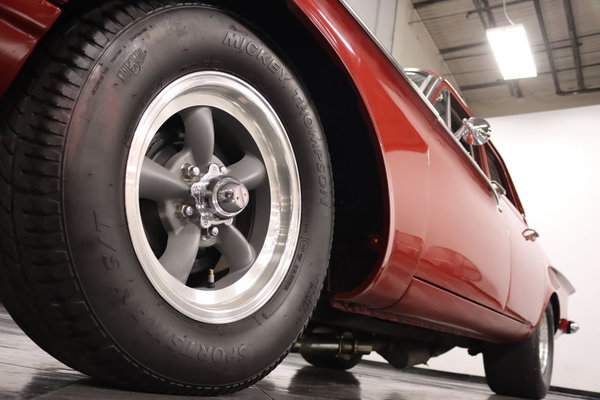 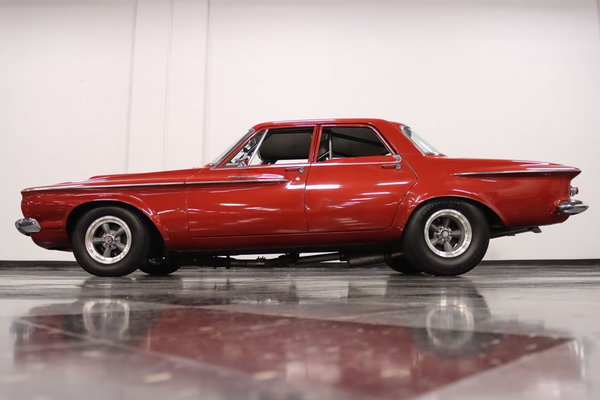 $29,995
Get Financing >
47789 miles
Ad Number: 184327285
Report this ad
Fort Worth, TX, US
No trades accepted
Streetside Classics-Dallas/Fort Worth (Business Seller) RJ Storefront
Share
Save
Msg.
Call
Item description
Few cars scream horsepower better than the '60s-era Mopars. Taking a big 4-door hardtop like this dazzling 1962 Plymouth Savoy and turning it into a Pro Street machine took some cojones even by Mopar standards, but the builders absolutely pulled it off with this redlight-to-redlight banger. Dropping a date-code correct 440 V8 big block under that massive scoop hood certainly helped, as did the red-hot burgundy paint, caged interior, and fat Mickey Thompson meats, resulting in a one-of-a-kind muscle car with off-the-charts curb appeal. Satellite-era Mopars were already some of the coolest cars ever made, and when it's armed to the teeth like this Savoy, it looks ready to blast off into space.

Colors like this particular shade of burgundy (the '62 Savoy was offered in a color called Cherry Red in 1962, and this is essentially that exact shade) were very popular in the '60s, and the big, mid-sized cars like this Savoy 4-door hardtop seem to wear it best. Of course, the giant scoop and pins on the hood and that kicked-up rake make it look far more aggressive than when it was just Grandpa's daily driver, but even though it's a Pro Street that's meant to go FAST, this one has a very polished and grown-up look. The paint is in very good shape, above average (especially for a Pro Street) and showing a deep shine that comes from modern materials, so if you're used to seeing dusty-looking vintage enamel on these cars, this one will come as a very pleasant surprise. It's not perfect, a few signs of age and other imperfections are present upon close examinations, but when this Mopar is at full throttle zipping by, who's going to notice? The Savoy was in the entry-level sedan of the lineup, but regardless of the pecking order Plymouth was never cheap on style and flair, and after the '61 models were widely known in the industry to have been "beaten with the ugly stick", the redesigned '62 was a breath of fresh air that sold much better. With that being said, even this final generation still takes some very bold risks in the design area that probably aren't for everyone, but no one will ever argue that the Savoy was conservative or run-of-the-mill. Between the concaved grille and quad headlights up front, the sharp creases on the hood, fenders, and profile, and that wide, ornate rear end, the 1962 Savoy has a lot of character to take in. Your eyes bounce from one angle to the next, as they scan from smooth curves to sharp contrasts, and that's before you even notice that this 4-door was built to get into a street fight and win. Tidy panel gaps, nice detailing around the glass and doors, and, of course, the giant hood scoop all give this car a very dramatic look that preview the performance, and the 'Old Styles' wrapped in those giant Mickey Thompson rubbers are the perfect endcaps. The chrome and stainless trim is quite nice as well, adding just the right amount of bling to the deep red finish.

The two-tone gray vinyl interior is all business, and that business is all about keeping the passengers safe and comfortable while traveling at darn near the speed of light. With bench seats fore and aft you know the original buyer's priorities were horsepower, not luxury, but they didn't skimp on the materials inside at all. The seat covers are newer, with contrasting grays that work really well against the red exterior, the door panels match exactly, the carpets insulate the cabin, and the headliner is taut. That's right, this isn't just some stripped down racer. It does have plenty of performance goodies, the most obvious being the roll cage that was neatly installed to stay out of the way, along with the Turbo Action Cheetah SCS shifter in the floor and the vast array of AutoMeter gauges in the center of the dash. There's also a wood-rimmed Grant steering wheel that man's the driver's cockpit, stock Plymouth gauges beyond it, and a big tachometer that was mounted up to keep an eye on the revs. Racing seatbelts were added up front, the back seat looks barely used (nobody's been brave enough to get back there yet), while the cavernous trunk is now filled with a relocated battery and fuel cell, as is the Pro Street style.

The 440 cubic inch V8 makes the kind of fat torque that makes even a big car like this feel fast. It starts easily and idles with a healthy lope that suggests unbridled horsepower, not luxury, and it's very cleanly detailed. There's Hemi Orange paint on the block itself, which is topped by a set of chrome valve covers and an open-element air cleaner. A Holley 4-barrel carburetor and an air-gap manifold handle intake duties, and a set of long-tube headers dump into a custom H-pipe dual exhaust system with electric cutouts and a dual exits that dump under the rear bumper. And yeah, it's very loud. You know it's built for combat with the extra deep groove large-diameter pulleys on the accessory drive and there's a big aluminum radiator up front to keep the whole show nice and cool. The transmission is a bulletproof 727 TorqueFlite 3-speed automatic feeding a heavy-duty narrow rear end, so the driveline is a known quantity that's ready to play. The pans are undercoated and there are newer suspension components throughout, and although it's not all shiny and perfect anyone would be proud to show off the undercarriage because it's very solid and clean. Legendary American Racing 'Old Style' Torque Thrust wheels look amazing on just about any classic, and these beauties are wearing thick 225/70/15 front and 315/60/15 rear Mickey Thompson Sportsman radials that perfectly complete the vintage performance look.