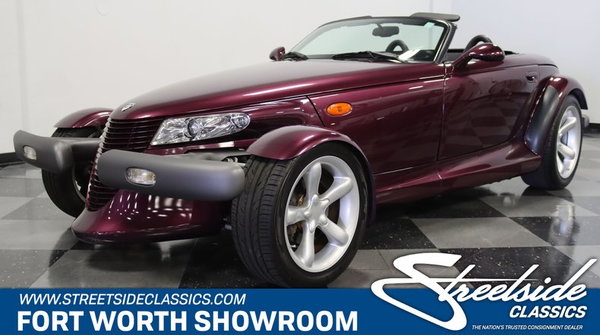 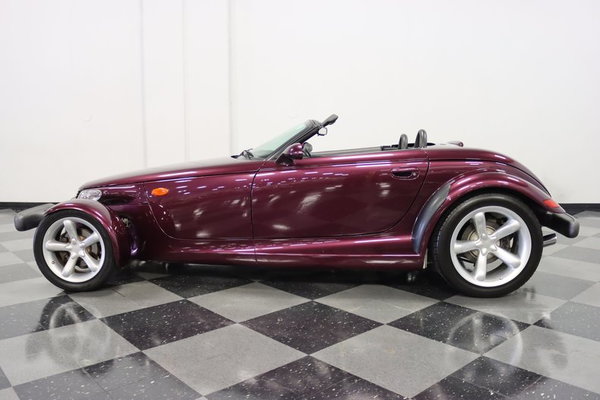 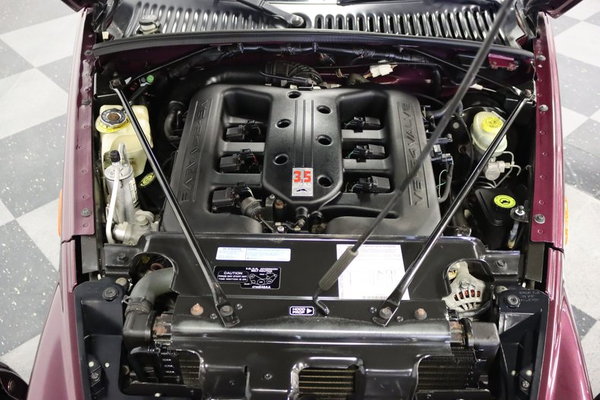 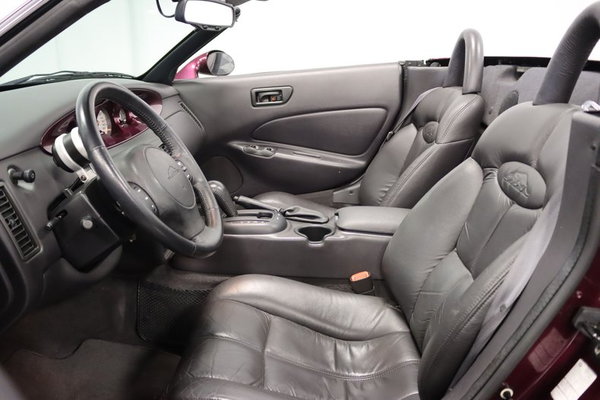 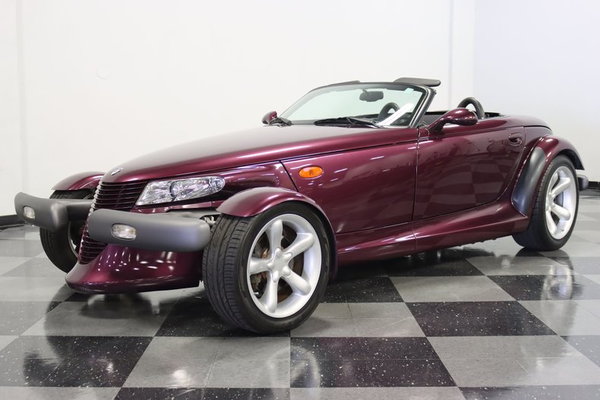 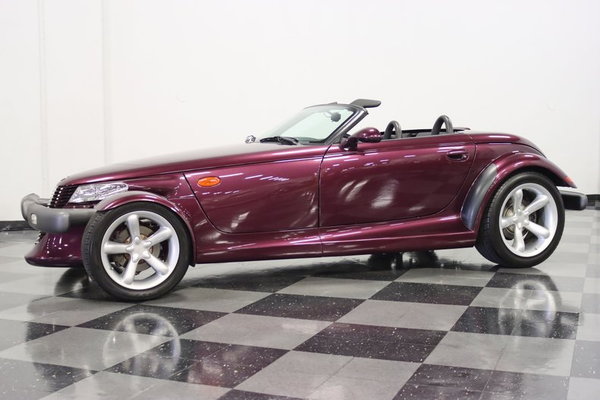 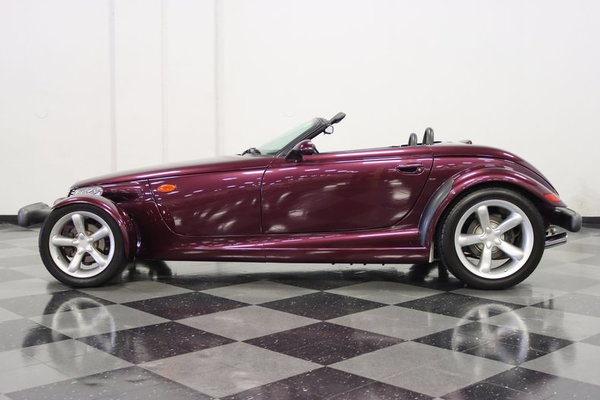 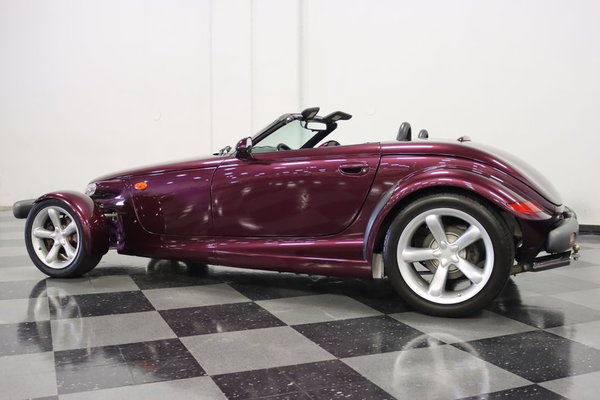 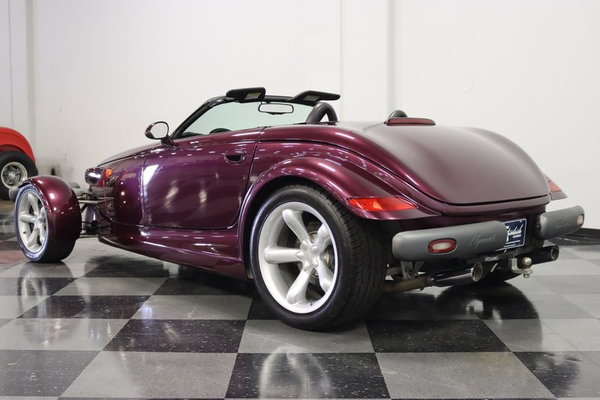 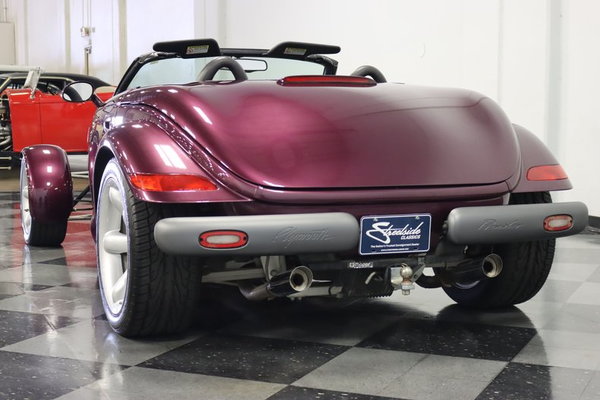 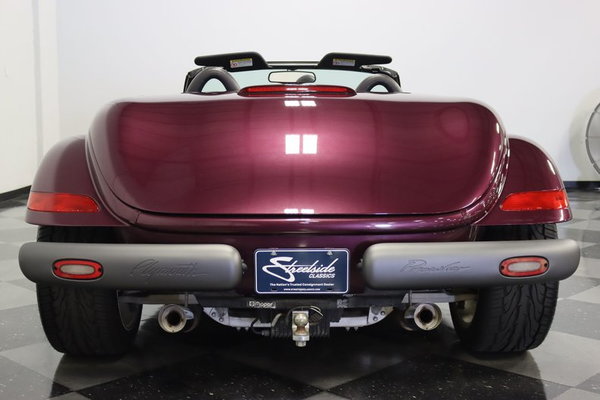 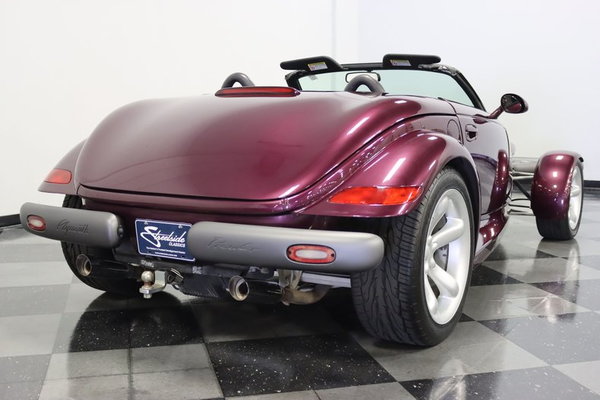 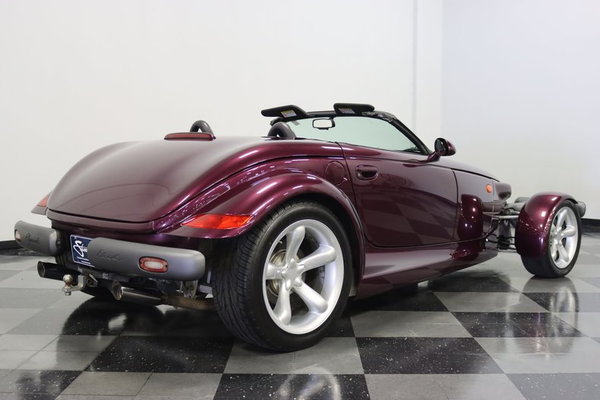 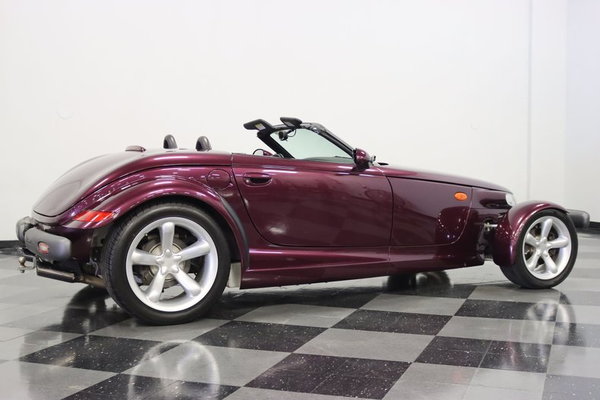 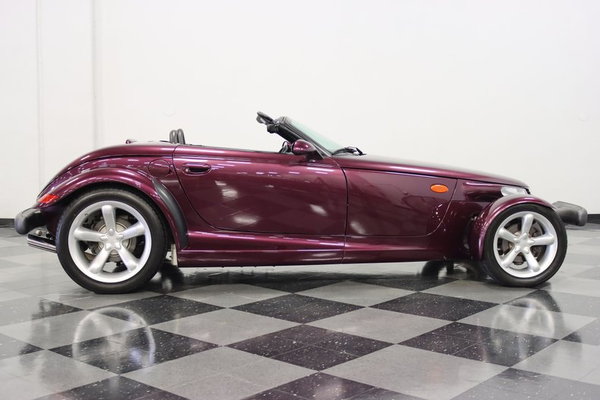 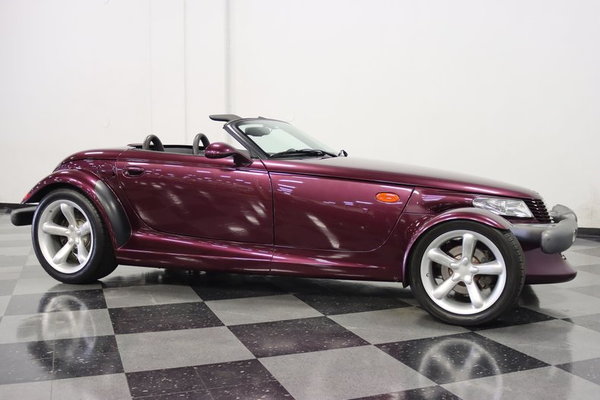 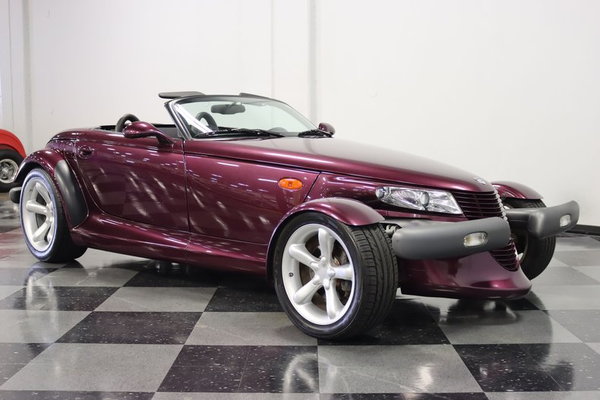 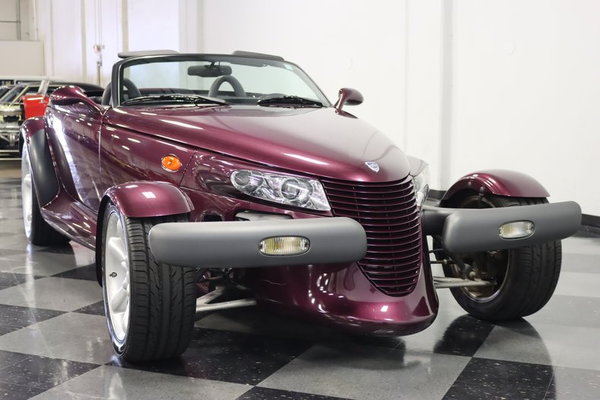 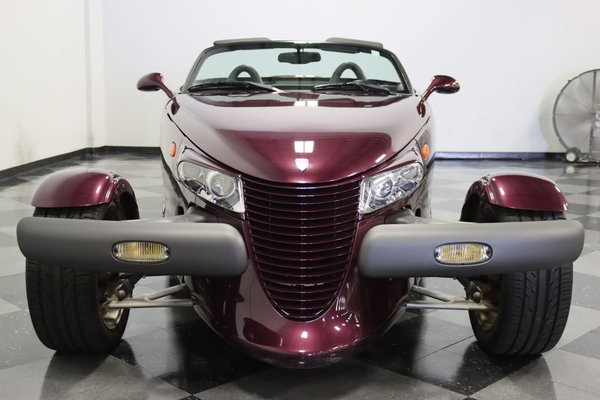 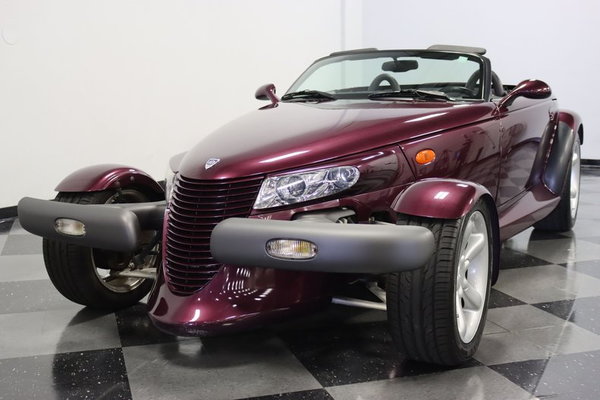 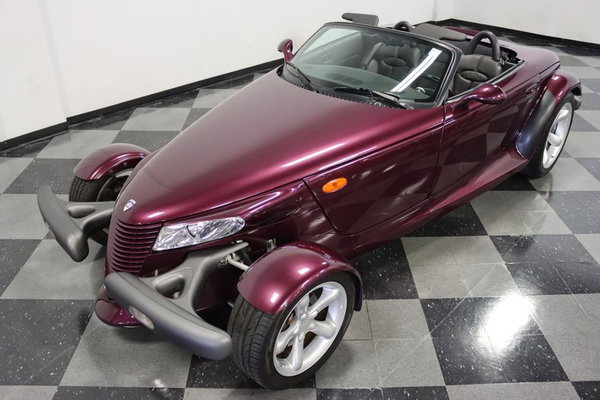 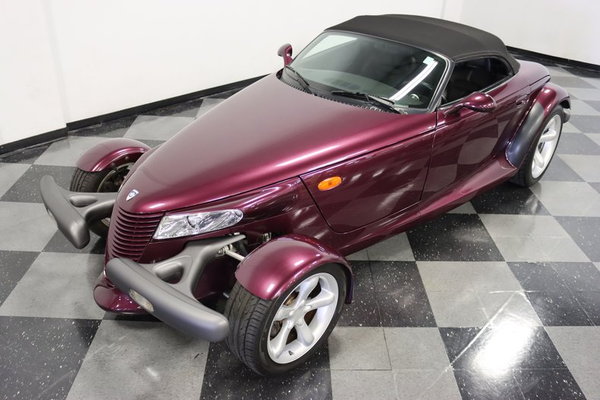 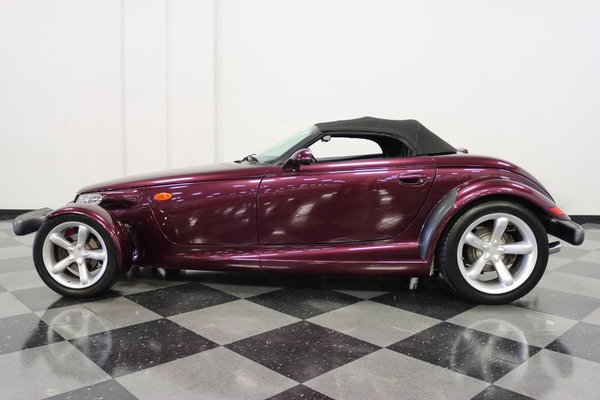 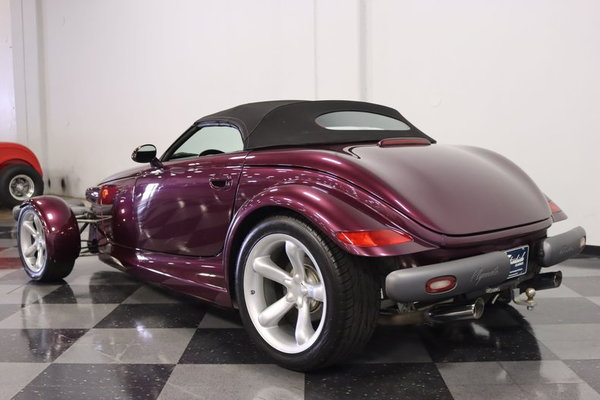 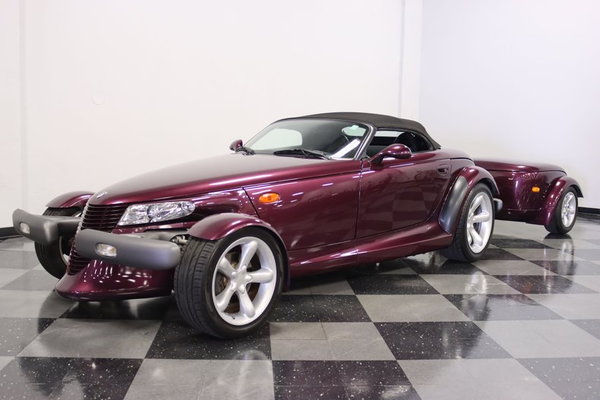 $44,995 Get Financing
Business Seller - Streetside Classics-Dallas/Fort Worth
FORT WORTH, TX , US

Remember when car companies were taking chances and exploring new markets? The results were cars like the Viper, the Ford GT, and perhaps the wildest real-world dream car ever built, the Plymouth Prowler. This 1999 Prowler shows just 7,058 original miles, making it one of the lowest-mileage examples we've ever had the privilege to feature and it is loaded to the gills and offered with a rare factory-matching Prowler Trailer to boot!

Finished in iconic Prowler Purple with a charcoal gray leather interior, this is the look of the very first Prowler you ever saw. It's channeling the great hot rods of the past with its rakish looks and dramatically staggered rolling stock - the hot rod reinvented. If you're a real car guy or gal, we don't have to tell you about the Prowler's influences or the homage that it pays to the streetrod kings of the past. Instead, think about what it represented to Chrysler Corporation. Its real name was the Prowler AIV, which stood for Aluminum Intensive Vehicle, and they used this low-production specialty car to learn how to build aluminum components that are remarkably still in use today. The fact that it also looks cool was simply a nice side effect, one of those collateral 'happy coincidences' we keep hearing about. This is an incredible low-mileage car with only 1-owner. Aside from some relatively minor damage on the lower portion of the vehicle that could be potentially be improved with a high-speed buff-and-wax (a scuff on the bottom of the front nose and a scratch just behind it on the right side), the only spots of concern are two corresponding quarter-sized gouges in the fiberglass right behind the front fenders. What happened here is not exactly known (the symmetry might suggest a trailer-strap mishap), but thankfully those defects are easily repairable by any quality bodyshop and because they are so low and out of sight, they can only be spotted upon closer examination. The rest of the car is downright impressive, with a uniform, deep, and lustrous finish that is essentially like-new, and it's so smooth to the touch you could straighten a wrinkled dress shirt on the decklid. That's what low miles and conscientious ownership gets you, and if it wasn't for the lower body mishap we described above we'd probably be lofting superlatives like 'best in the country' and 'so fine you'll slap your Momma' at it on a regular basis. It's completely stock, of course, and the previous owner spent plenty of time keeping it clean, waxed, and maintained, and even that rare-optioned, original Prowler Trailer that hooks up to the back is in great shape, too.

The dark gray leather has a great look in the Prowler, recalling the heavy-duty hides used on vintage rods and even motorcycles. Of course, everything was standard in Plymouth's flagship, from A/C and power windows to keyless entry and a massive sound system that fills the cabin with sound, top up or top down. Retro styling cues include the column-mounted tach and center-mounted instrument panel that has a color-matched bezel that was especially dramatic on light colored Prowlers. The idea is that this is an OEM hot rod with everything fully engineered and fully functional, and it just works. Airbags, seatbelts, and all the bells and whistles truly make the Prowler a no-compromises hot rod. There's even a snug-fitting convertible top with glass rear window and defroster that stashes below the rear deck for a truly sleek look. With those giant rear tires, there's not a lot of trunk space but does it really matter when the car looks this good?

Chrysler's corporate 3.5 liter 24-valve V6 with 253 horsepower is a snug fit in the pointed engine bay, but given the car's lightweight structure, it delivers entertaining performance. Packed in there are all the bells and whistles plus fuel injection and distributorless ignition, so it always stars and runs, and fuel economy is impressive if you stay out of the loud pedal. The 4-speed automatic transmission was the first installation of Chrysler's "Auto Stick" setup, which allows manual shifting on the fly, and the all-independent suspension soaks up bumps better than any buggy spring setup ever could. Four-wheel discs with ABS are confidence-inspiring, the responsive power steering system is a blast to handle, and the sporty coil-over suspension below helps this Prowler get in and out of trouble with relative ease. Staggered alloys (17-inch front and 20-inch rear) are a modern take on the classic, big-and-little hotrod stance, and they look great wrapped in beefy Toyo performance radials at all four corners.

A very cool car that has become an icon in its own time, the Prowler is a great tribute to the past and a smart investment for the future. Offered with its original window sticker and owner's manuals, this 1-owner, lifelong Texas hotrod is finally ready for a new home. Could it be yours? Call today!
View Full Description