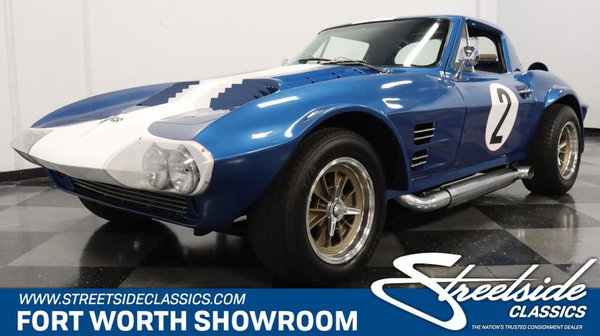 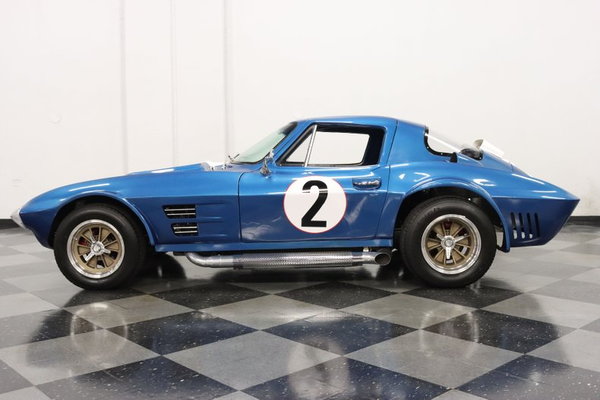 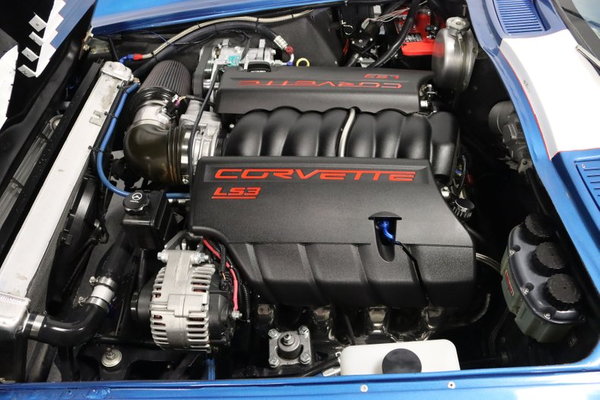 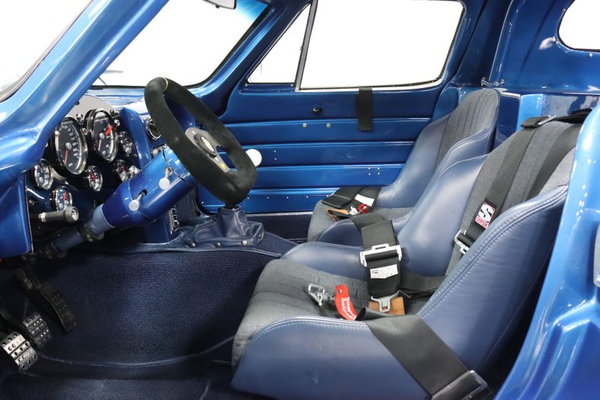 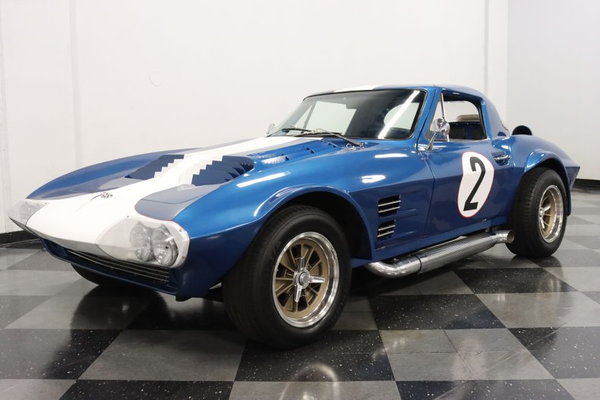 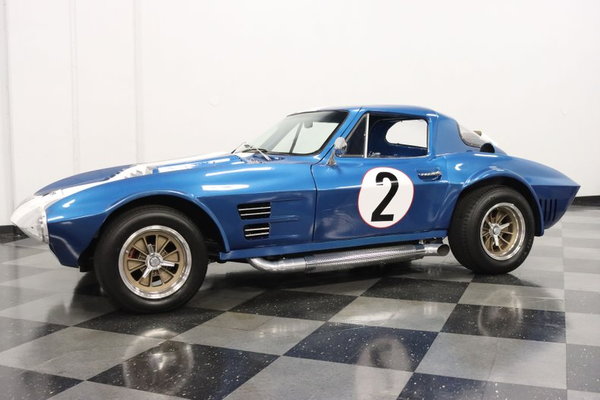 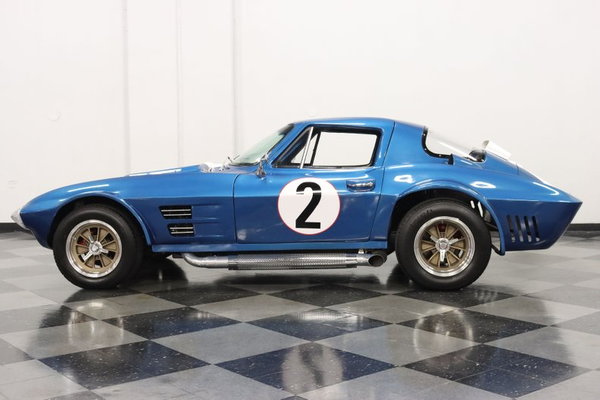 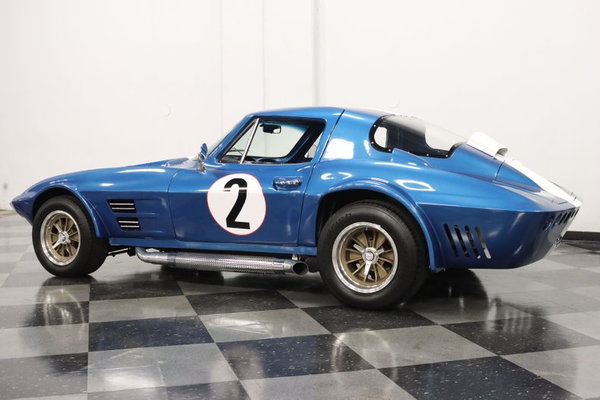 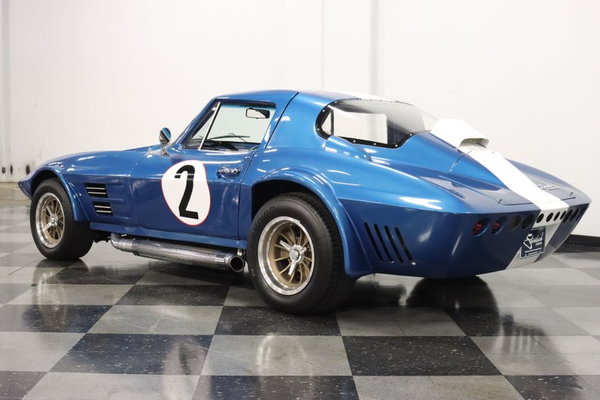 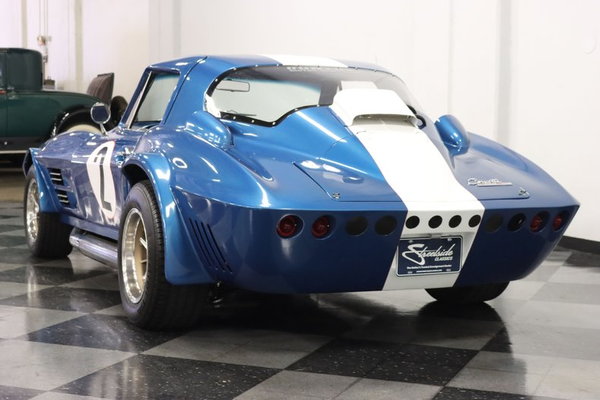 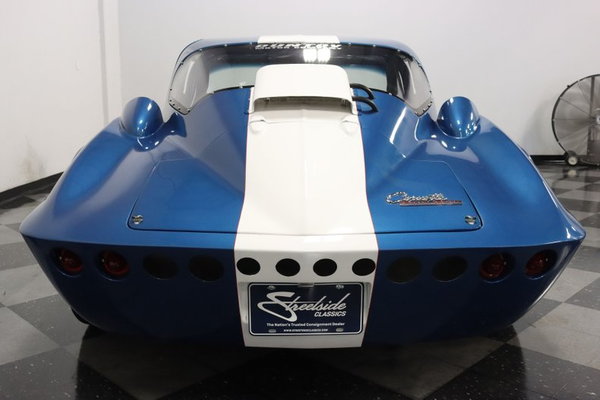 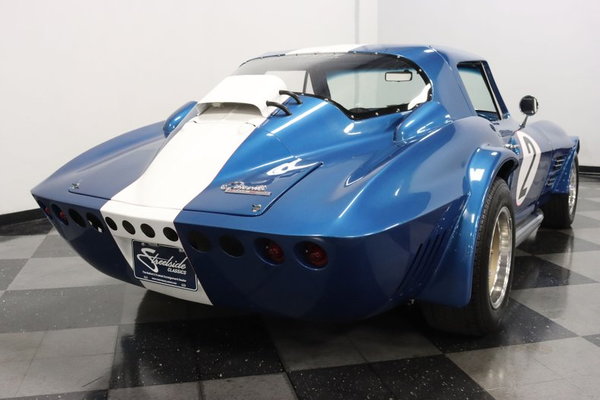 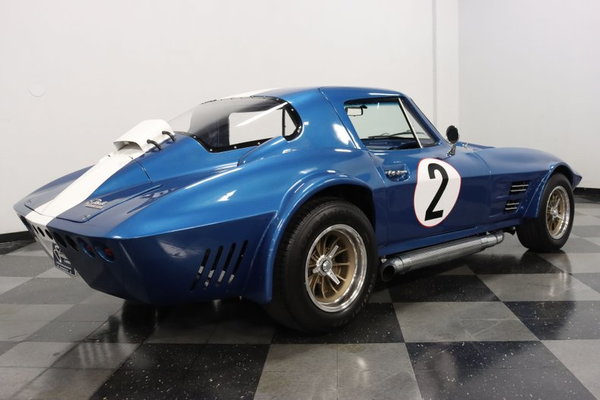 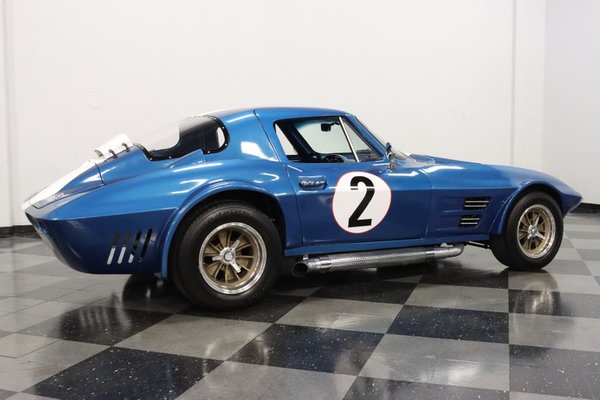 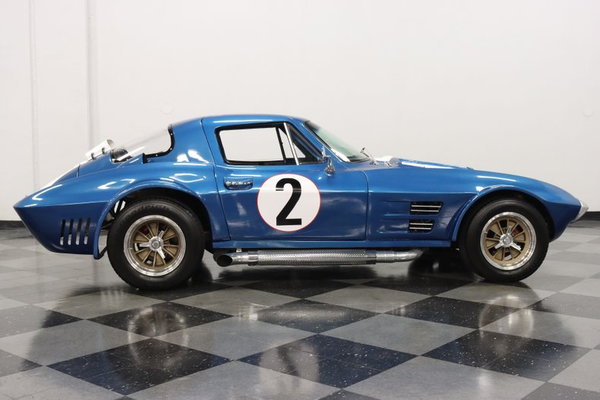 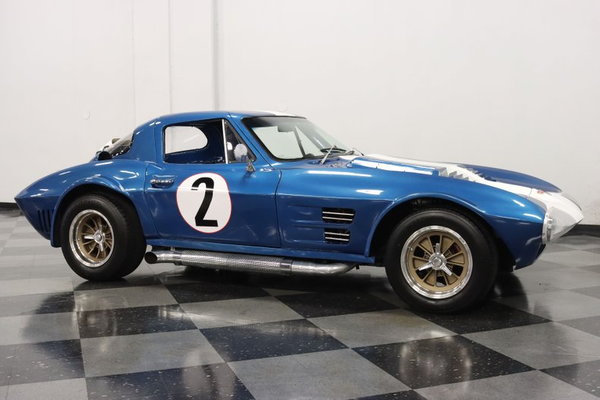 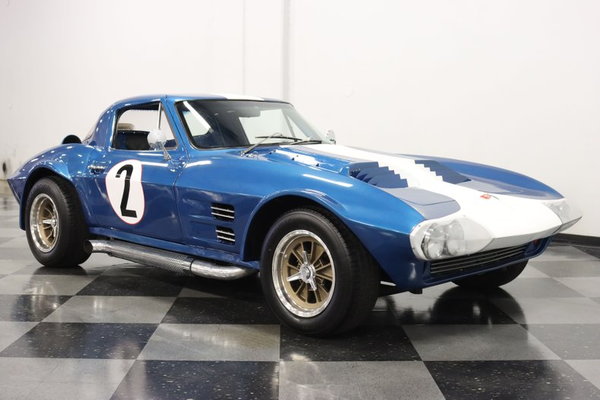 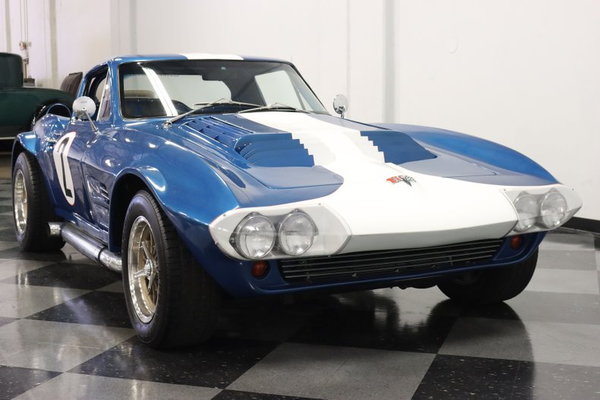 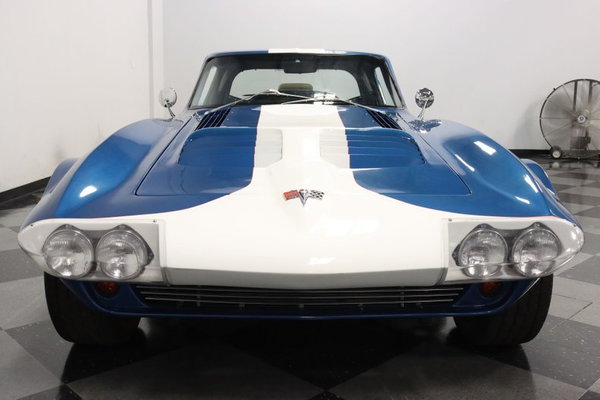 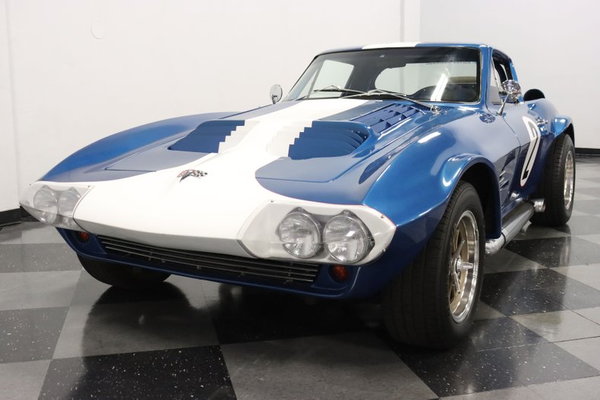 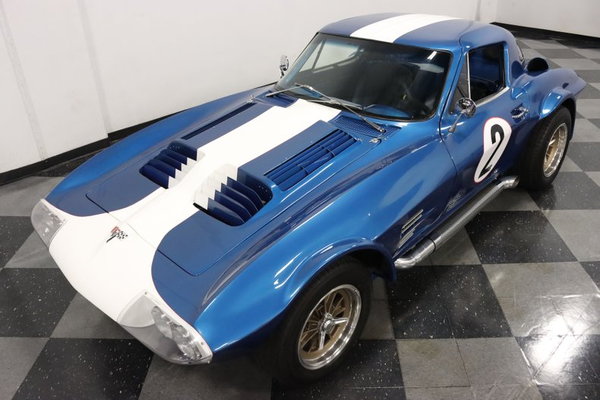 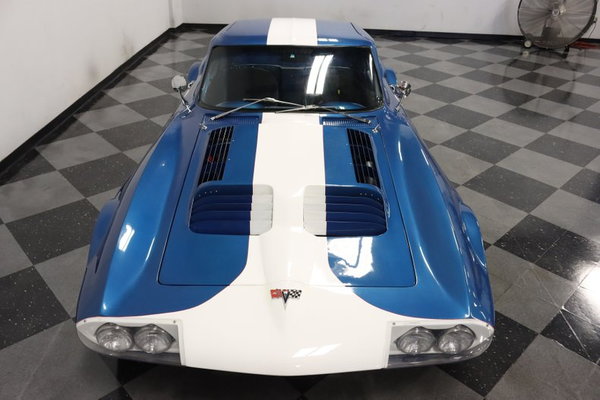 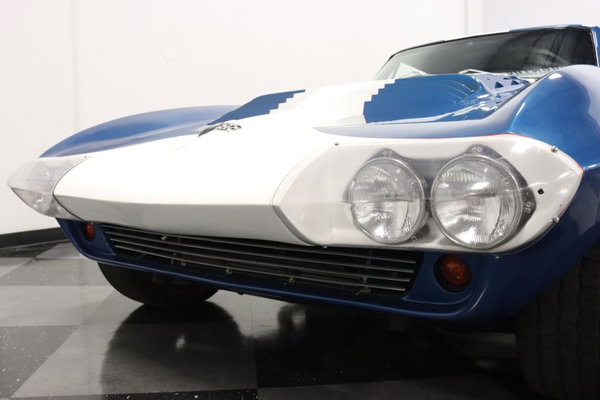 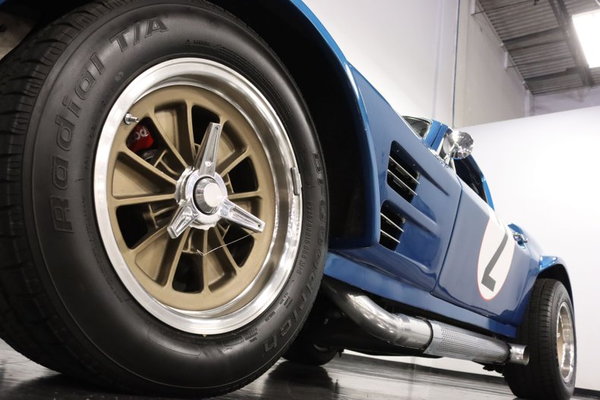 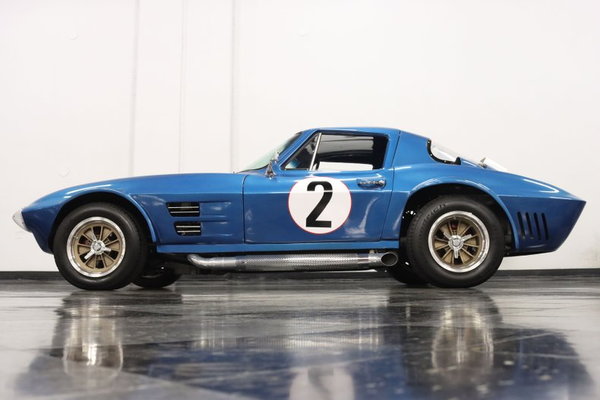 $183,995
Get Financing >
1220 miles
Ad Number: 184365578
Report this ad
Fort Worth, TX, US
No trades accepted
Streetside Classics-Dallas/Fort Worth (Business Seller) RJ Storefront
Share
Save
Msg.
Call
Item description
When Zora Arkus-Duntov sets his mind on something, the entire automotive world sits back in wonderment. That's exactly what happened when he took his vaunted C2 Sting Ray and developed it into a racing version called the Grand Sport. GM grounded the project before it could ever get off the ground, but it wasn't before they granted 20 specific VINs, designs, and molds for these purpose-built race cars. Only six were built in the '60s before GM brought the final axe down on the project, and although they were barely raced, they absolutely embarrassed any Shelby creation whenever they did make a rare appearance at the track. The legend of the mighty Grand Sports (and what could've been had they ever been homologated for production) grew in the racing community, and eventually the exclusive rights to the remaining 14 cars were purchased by ex-GM engineer and race-driver, Alan Sevadjian. Sevadjian's outfit, Duntov Motor Company, has been building Corvette Race Cars since the '80s, and because they owned the rights, they also built the authentic 'continuation' Grand Sports. This gorgeous 1963 Chevrolet Corvette Grand Sport is #18.
br>
Yes, you read that right. This is one of the original VIN Grand Sports, that uses the same design and mold that Zora picked out for his original race cars. Had he ever been given the chance, this car would've been built in 1963 and collecting Cobra pink slips at every race track in America from then on. Instead, it was built decades later using one of the remaining 14 VINs, along with the original designs and molds, but in the spirit of Corvette racing, Sevadjian filled it with the top performance parts of our day, rather than completely recreating the original race cars. That means this vehicle is about as close to one of the original six Grand Sports as you can get, particularly on the exterior. Sherwin-Williams Dimension Guardsman Blue on White is the paint scheme, identical to that of '63, and even though the car is street-legal, it's never been raced and therefore still in excellent shape. No longer perfect, as it has logged 1220 miles since it was built, but nevertheless the finish is still incredibly shiny and the body is laser straight. Following the original specs means deleted bumpers, exposed headlight covers with clear lenses, an aggressive louvered hood, sculpted air vents on the beefy rear end, and of course, chrome side-pipes at the flanks. It's a work of art, executed to a top-end level that would even make Mr. Duntov proud.
Inside it's strictly business, fairly spartan but purpose built to go FAST. Contoured, low-back racing buckets feature Simpson 5-point racing harnesses, plush blue carpets line the floors and are protected with matching floor mats, while simple door panels at the flanks argue for function over form. The dashboard was reworked and painted blue to match, and is highlighted by a gloss-black bezel mounted ahead of the driver that's been filled with an array of gauges that work to keep a close eye on the organized violence under the hood. An OMP racing steering wheel was mounted atop a tilt column and is ready for white-knuckle abuse, and it's a perfect complement to the cue-ball topped Hurst shifter that's only a short reach away. Despite the Grand Sports racing pedigree, it isn't completely bereft of creature comforts, as it comes equipped with aluminum racing pedals, a full Vintage Air A/C system, and even a stereo system managed by the vertically installed, retro-style AM/FM/AUX head unit in the center stack. And believe it or not, there's even enough trunk space for a couple trophies and a travel bag.
Although the looks are pure 1963 Grand Sport, what moves it is much more modern, and therefore much more powerful. The original race cars used 377 cubic inch small blocks and the top GM fuel-injection of the day, whereas #18 is powered by a GM E-Rod 6.2L LS3 V8 that mirrors the same displacement, but is aided by modern fuel-injection and electronics. Power is rated at 430HP, and the car is geared to go 174MPH at 5000RPM, with a redline of 5900RPM. And when you're hammering it down and feel the incredible light weight of 2550 lbs, then you'll quickly understand why everyone is so obsessed with power-to-weight ratios. The lively LS3 mates to a Tremec TKO600 5-speed manual that's kept in line with a transmission cooler, and it plants itself to the road with the added help of modern power steering and Wilwood power 4-wheel disc brakes. Number 18 is nearly identical to the original six Grand Sports with a heavy-duty, steel frame composed of 5-inch longitudinal tubing, although modern suspension components throughout help stiffen the body and plant it to the ground. A giant aluminum radiator with a big auxiliary fan keeps this Corvette nice and cool, and the soundtrack is downright erotic thanks to those thumping side-pipes at the flanks. Finishing the timeless look is a set of 15-inch gold-and-chrome alloys equipped with knock-off spinners and safety cables, and they come wrapped in staggered 225/60/15 front and 245/60/15 rear BFGoodrich T/A radials.
Flat-out, this is one of the most pedigreed, exclusive American motoring icons we've ever featured here at Streetside Classics. Even the replica versions of these race cars are extremely valuable and popular today, imagine what happens when you pull up in a real-deal, 1 of 20 original Grand Sport? Built by the only professionals that have the right to make them, and to such a top-notch standard that our race-loving forefathers would be jealous. Be a part of history and call today!
Full description Show less
Sponsored Ad
Full Item Info
Condition:
Used
Mileage:
1220
Seller Information
Business
Streetside Classics-Dallas/Fort Worth RJ Storefront
5400 Sandshell Dr, Fort Worth, TX 76137
Phone
Show phone number
Website
www.streetsideclassics.com/
Member Since
April 2018
Message Seller
RJ Seller Store
Buyer Resources