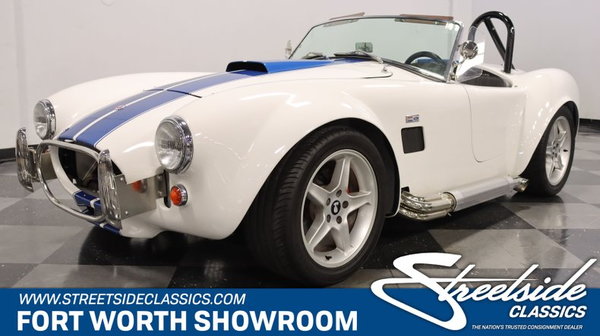 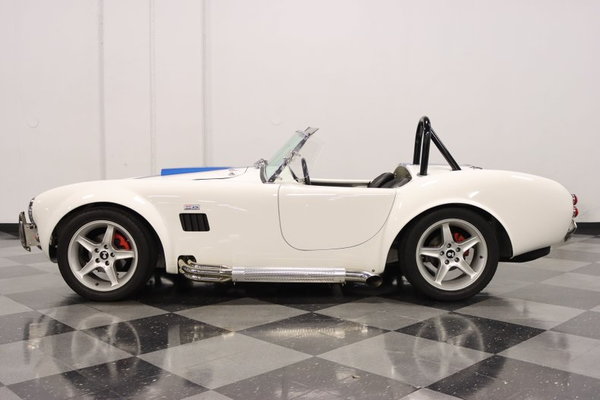 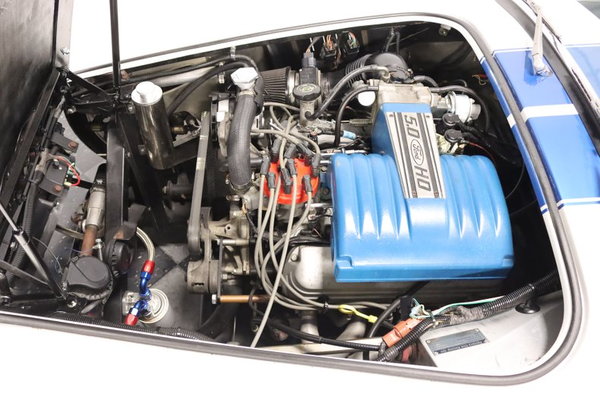 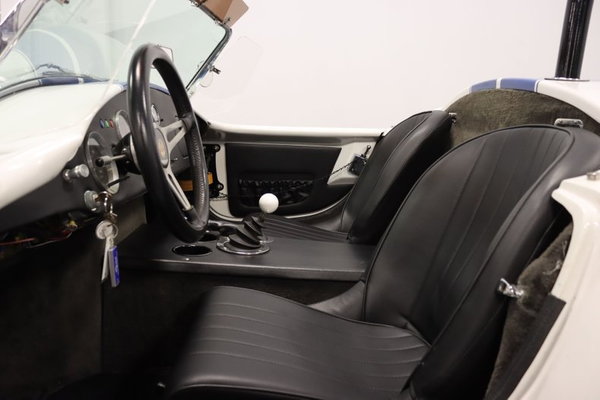 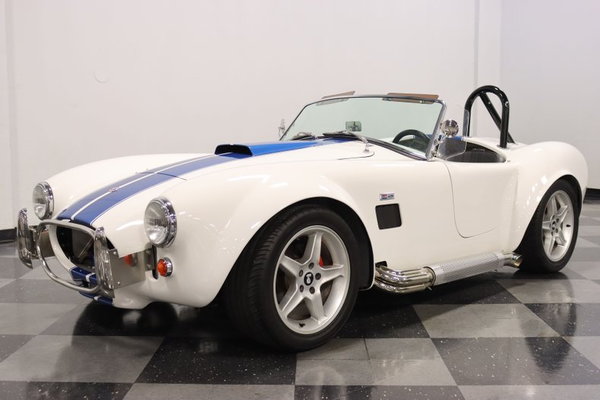 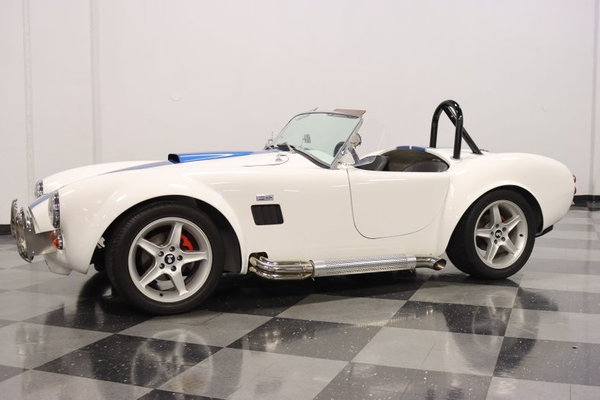 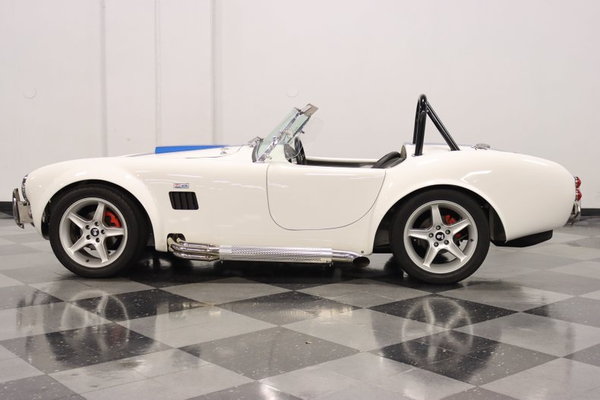 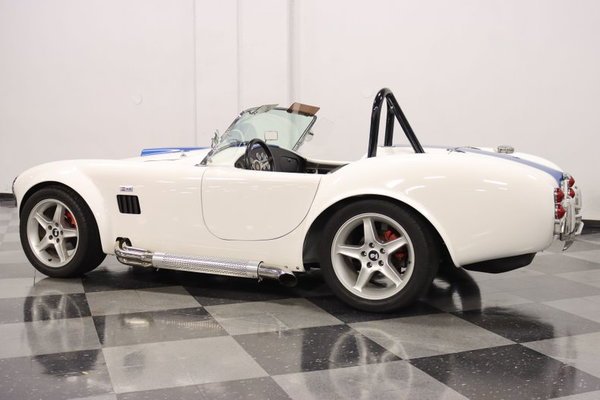 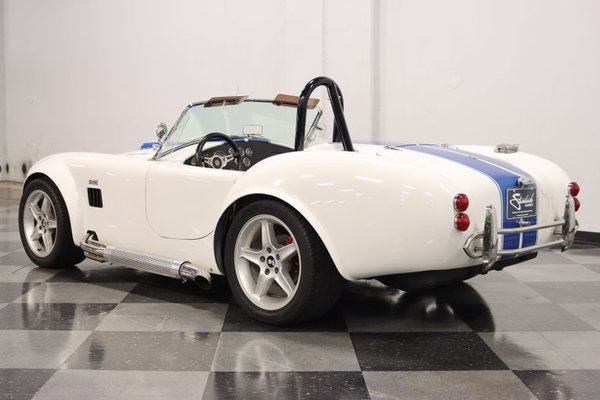 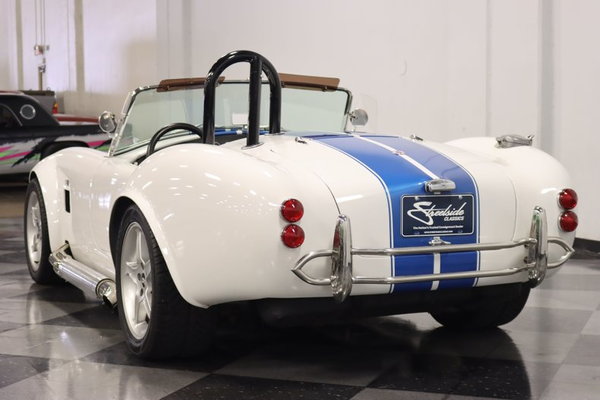 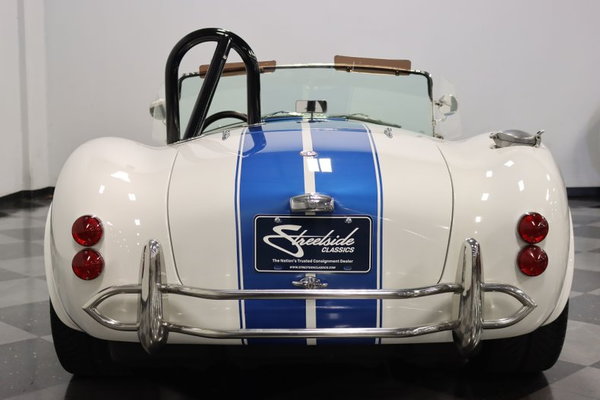 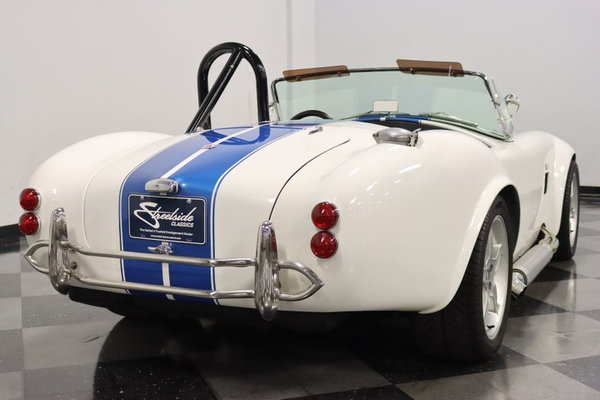 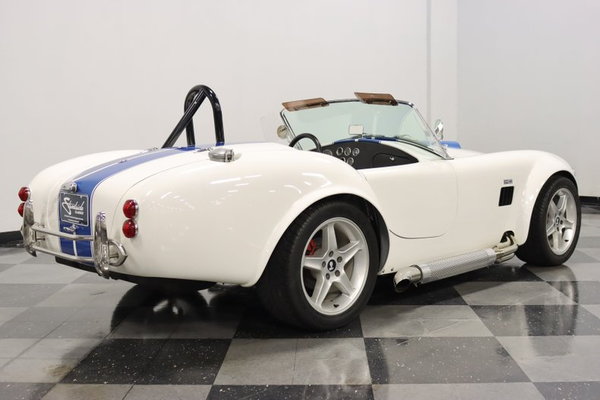 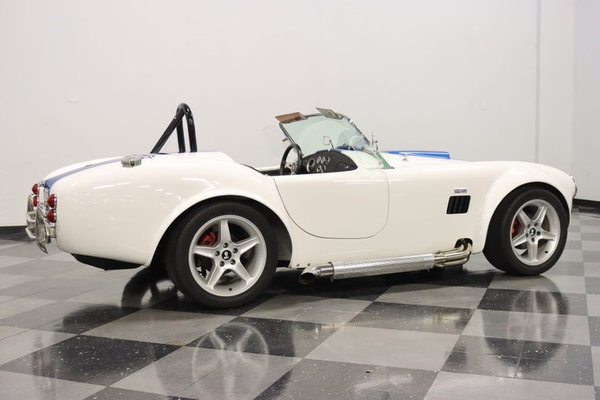 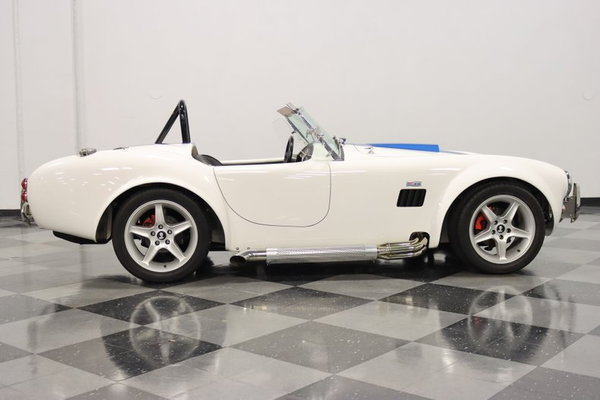 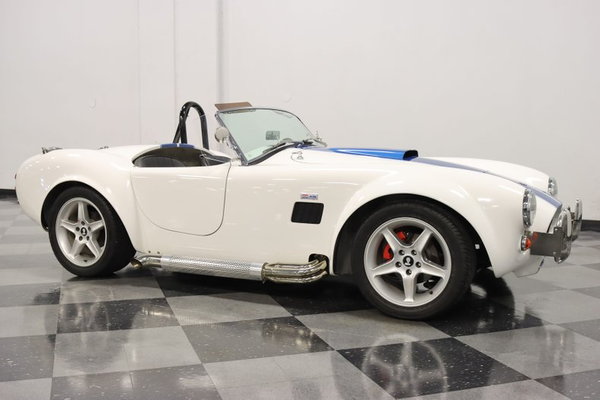 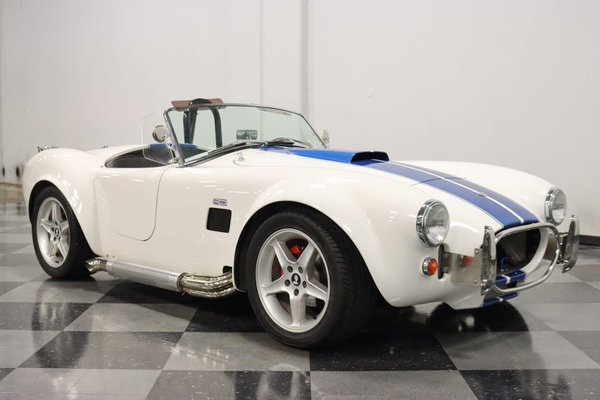 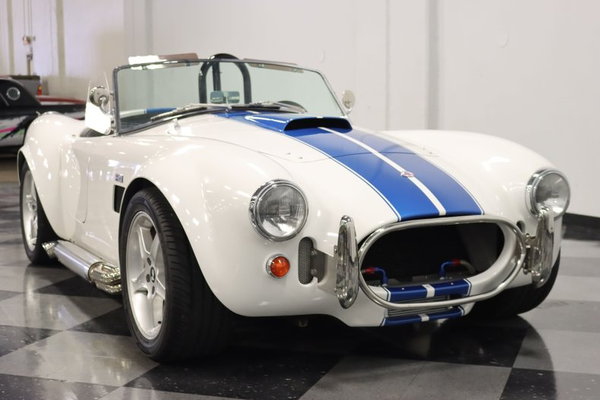 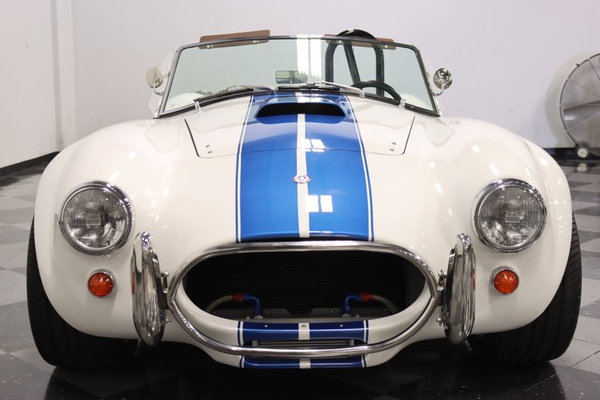 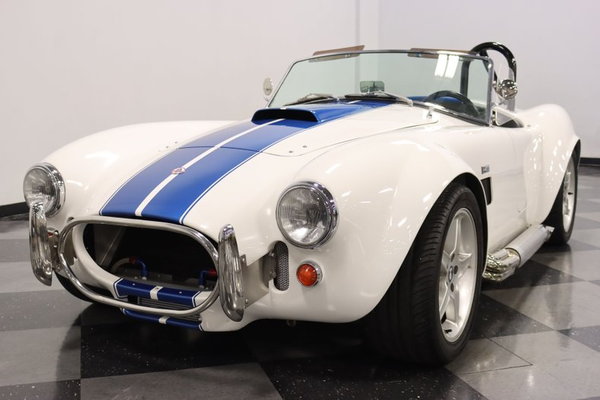 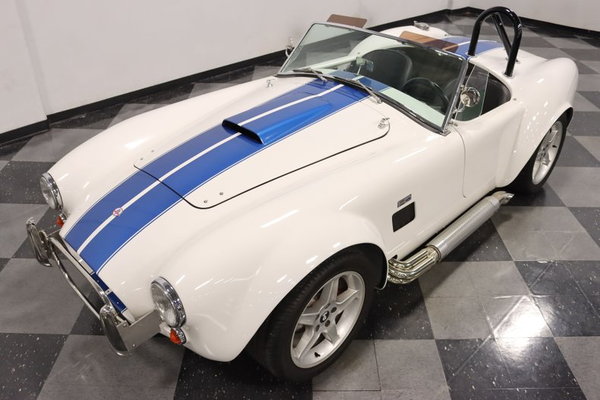 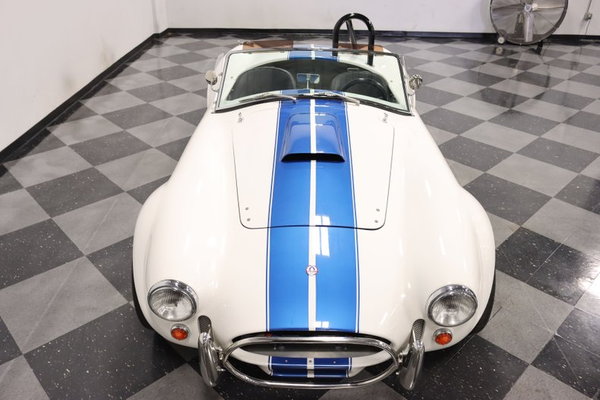 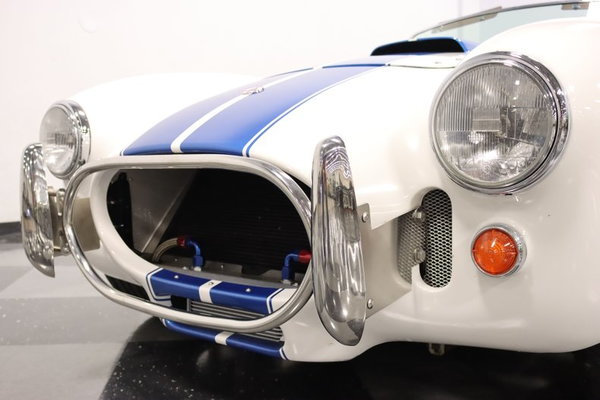 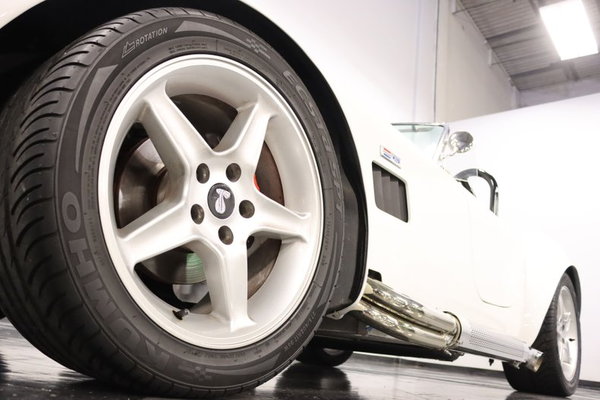 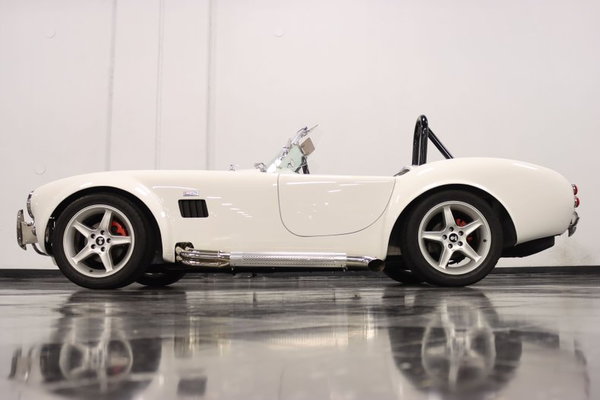 $54,995
Get Financing >
6272 miles
Ad Number: 184397007
Report this ad
Fort Worth, TX, US
No trades accepted
Streetside Classics-Dallas/Fort Worth (Business Seller) RJ Storefront
Share
Save
Msg.
Call
Item description
The iconic colors, taller driver concessions, fuel-injected 5.0 motor, five-speed, and a fully independent sport suspension mean this 1965 Shelby Cobra already has everything you really want even before you find out this sleek machine is a quality Factory Five example.
This Cobra replica gets the look right from the first impression. After all, white with blue stripes is a true American racing color theme - especially made famous by Shelby. This is a quality build that was completed around 2002 (and titled as a 2003) with less than 6,300 miles on it. So the overall appearance strikes the right balance where it's still a driver's car, but it has the low mileage that lets you know this one has been respected. That's why you can see all the great Cobra styling cues, including the sporty flared fenders, hood scoop, and a front air intake that's wide open so it looks like it wants to consume all lesser cars. This was really built to be a great original-style competition Cobra, and so you see that in the details, like the push bumpers, racing roll hoop, side pipes, and gas cap. But those later Mustang Cobra R style alloys also signal this is updated from the original formula.
The interior gets the performance car feeling right. Low-back racing seats, a short-throw shifter, a sport steering wheel, full gauges, and a bright red start button will get your enthusiast's heart pumping faster. But we also just like the clean look of a low-mileage build. There are even some nice comfort details you don't get on many other Cobras, like cup holders, full carpeting, and a convertible top. This event has the dropped floor setup for taller drivers. So while this doesn't lose the raw performance feel that you love in a Cobra, it also is quite a bit more accommodating.
It's always great to see a Ford V8 under the hoods of Cobra, and this one takes the legend into the modern era. This is a 5.0-liter fuel-injected motor, and we all know how great the Five-Oh is in a Mustang, so just imagine it in something lighter and nimbler. Plus, it has the right pieces, like a remote oil filter, MSD ignition, electric fans, and headers feeding into those awesome side pipes. Best of all, you are in full control of the power and rumble with the five-speed manual transmission. Keeping you connected to the road and on the best racing line is the fully-independent race-inspired suspension with adjustable coilovers. There are also ZR-rated tires and disc brakes at every wheel.
The sale comes with build receipts and service manuals. This is the Factory Five Cobra that has a great sense of classic style as well as the right upgrades under the skin to be a terrific modern sports car. So if you're looking for a driver's Cobra, you know this is the one. Call today!!!
Full description Show less
Sponsored Ad
Full Item Info
Condition:
Used
Mileage:
6272
Seller Information
Business
Streetside Classics-Dallas/Fort Worth RJ Storefront
5400 Sandshell Dr, Fort Worth, TX 76137
Phone
Show phone number
Website
www.streetsideclassics.com/
Member Since
April 2018
Message Seller
RJ Seller Store
Buyer Resources