About The Busted Knuckle Garage
My name is Warren Tracy. I am the owner/developer of the Busted Knuckle Garage automotive lifestyle brand. Thank you for visiting my site. I came up with this idea while living at the bottom of the Grand Canyon, a place that obviously has no cars. Being a car guy however, one morning I woke up to go to work and found a crude cartoon of the Busted Knuckle Garage that I had drawn in my sleep, no knowledge of doing it, trademarked it, worked it and now 20 years later, any and all merchandise sold on the web or in stores was a result of that cartoon. No big, soulless corporation cranking out cheap goodies. Just one guy with a passion for ol’ cars and one lousy guy with a wrench. 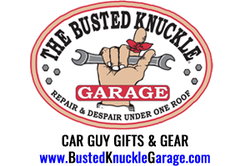 Try to picture the swoosh before the shoe, the apple before the, well, Apple.

The man is Costco member Warren Tracy. The logo is a wrench-wielding hand with a bandage on the index finger. The name is The Busted Knuckle Garage. And the dream? To run a business he could call his own. In sort of a “design it and they will come” approach, he created a successful business, backwards.

But, we’re getting ahead of ourselves, just as Tracy did. Let’s dial back 13 or so years, to the bottom of the Grand Canyon, a place accessible only by foot, by raft or on the back of a mule. It’s hardly the place you would expect automotive inspiration to strike. Yet it did, and, as long as we’re using automotive terms, the inspiration that struck Tracy came in reverse.

In 1996, Tracy had been living on and working as manager of the Phantom Ranch guest ranch for about 10 years. A self-described “gear head,” who had started twisting wrenches as a teen, he woke up one night with a vision. He made a quick sketch of an injured hand holding a wrench and then went back to sleep.

For someone with an entrepreneurial itch, someone who understood the power of branding from his experience marketing Phantom Ranch, the doodle presented something of a conundrum. What did it represent? It haunted him, nagged at him. He eventually trademarked it, but a year later the logo was still dangling there, its meaning just out of reach.

It was in 1997 that Tracy, whose career path has also included mortgage banking, delivering yachts and operating a bicycle shop, met a man making faux-antique distressed wooden signs. He decided to commission some featuring his design, along with the name “The Busted Knuckle Garage,” and posted an ad in an auto magazine.

“We sold 100 the first month,” Tracy says. Encouraged, Tracy struck a deal shortly thereafter with an herbologist, a regular ranch patron. She had developed a muscle-easing salve she was looking to sell, something that Tracy thought would be perfect for an aching mechanic. They marketed it under the Busted Knuckle brand, and “it just took off,” Tracy says. “We knew we were on to something.”

Tracy quit his job at Phantom Ranch. He mortgaged his house, ran his credit cards to the limit. He sold the cars and motorcycles he had built and collected. He marketed more skin-care products. The logo made its appearance on signs and T-shirts and hats. Tracy began attending car shows and automotive supply stores across the country, hawking the brand and the growing line of products.

Combining the marketing and small business lessons he’d learned from his various occupations, over the past 10 years Tracy has built The Busted Knuckle Garage into a lifestyle brand that sells more than 250 different items—from clothing, garage and home décor and gifts to collectibles and car-care products— to fellow wrench twisters.

Through direct sales at the Busted Knuckle Web site (www.bustedknucklegarage.com), automotive catalogs and national chain stores, Tracy, who finally opened an actual brick-and-mortar retail location in 2005 in Prescott, Arizona, has created something unique.

While the logo and the brand became a business for Tracy, they represent myriad things to his customers, resonating with everyone from hard-core mechanics to wannabes. He built the business around what the logo meant, rather than the other way around.

And in a final twist, guys aren’t the only ones buying Busted Knuckle products. Tracy says that 70 percent of retail sales come from women buying gifts for men.

“Who is my market?” he asks. He’s still at a loss to explain. “We let customers define it, as it relates to their experience.”