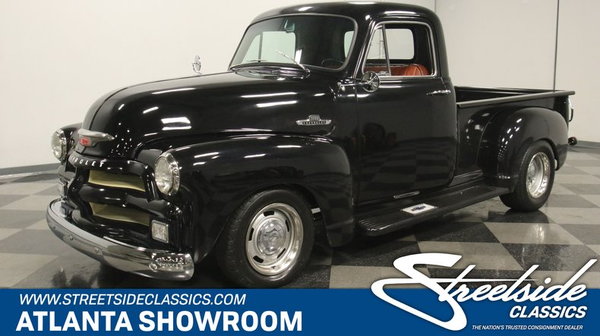 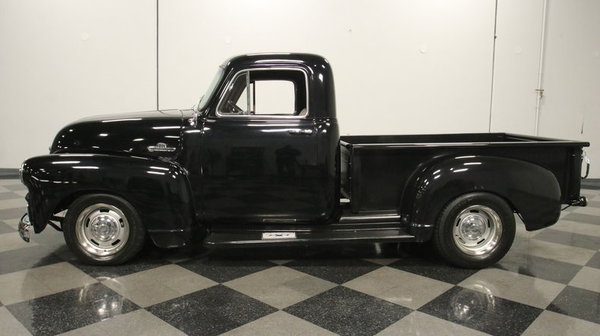 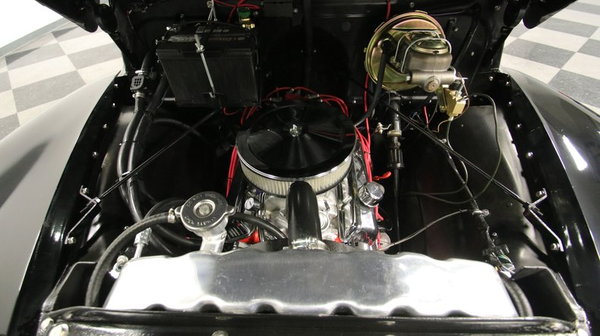 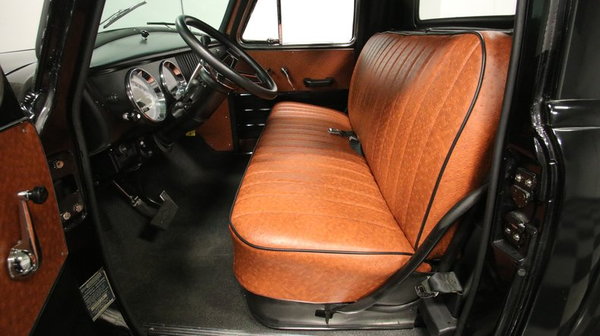 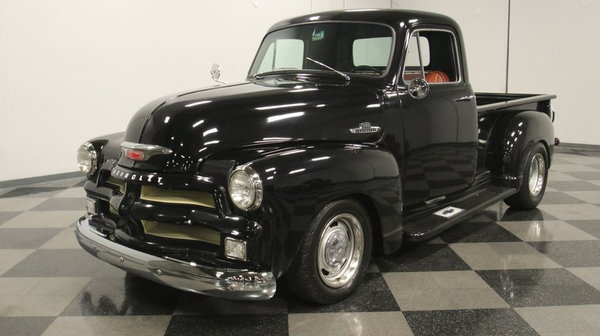 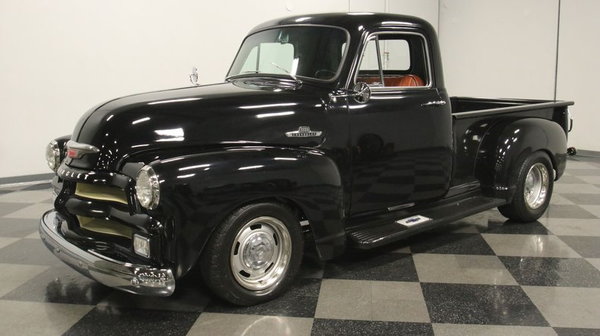 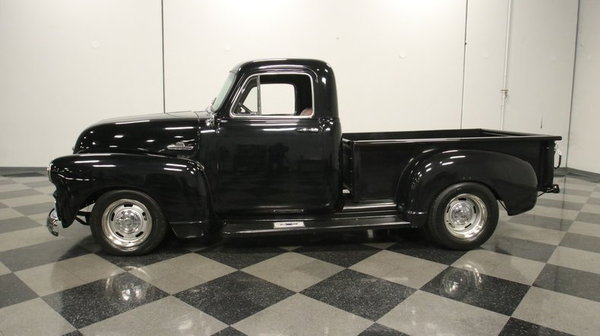 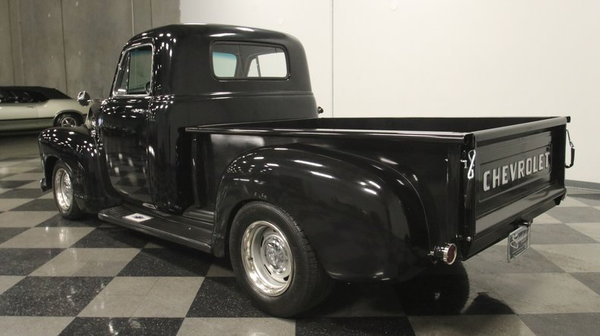 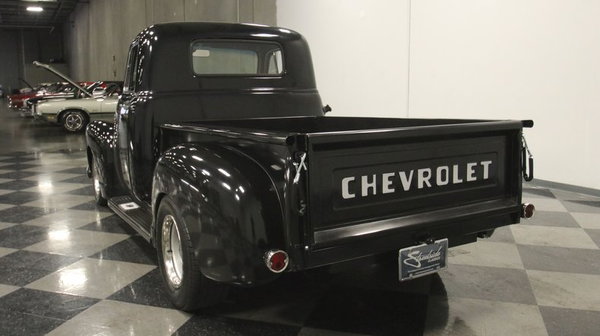 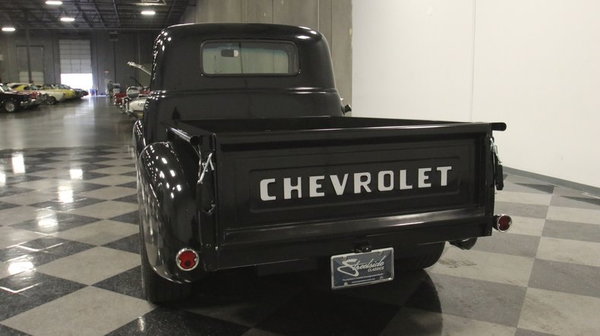 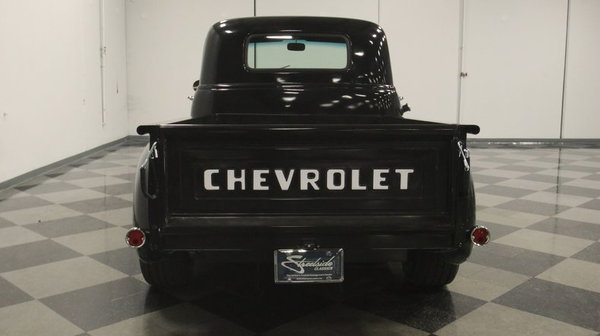 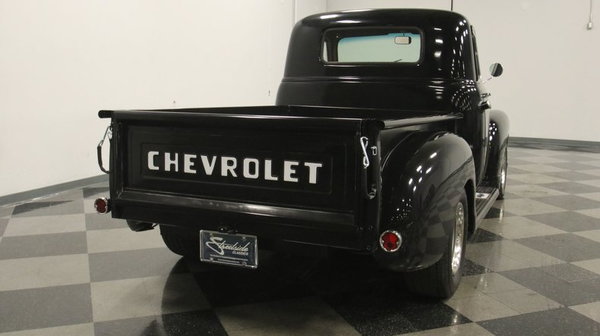 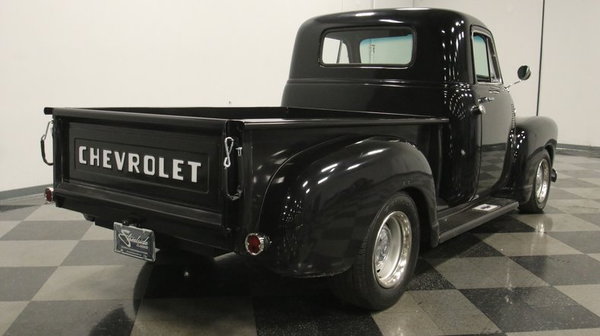 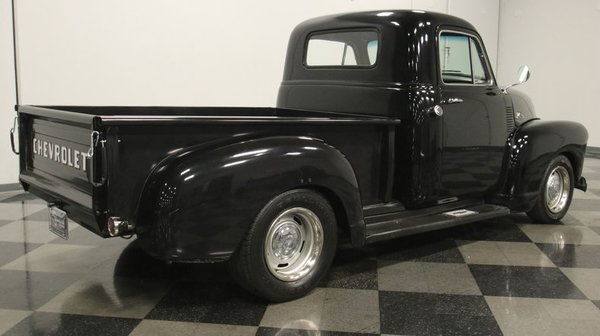 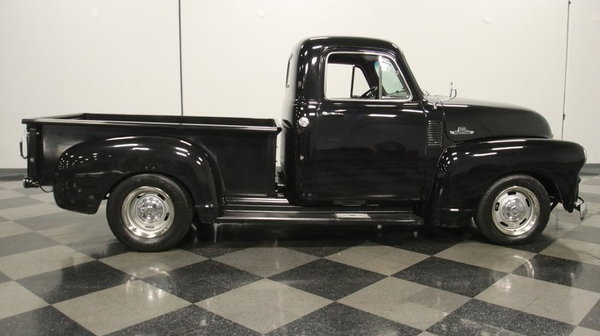 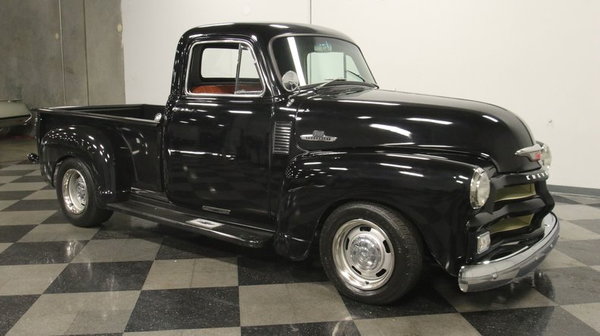 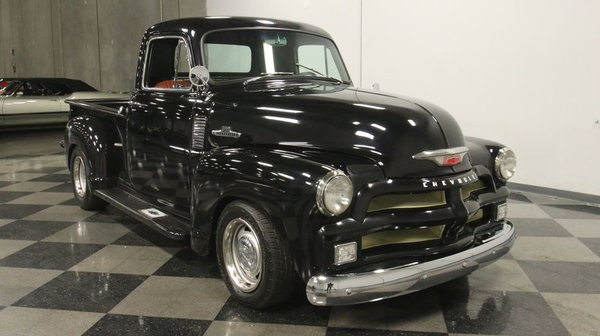 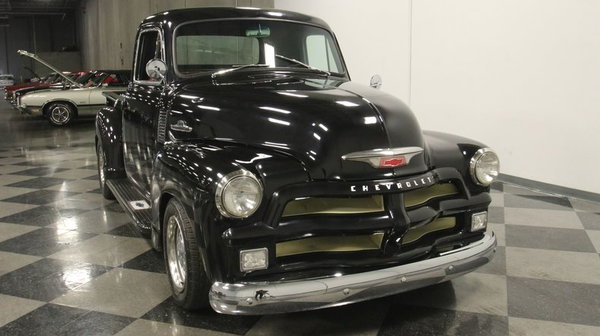 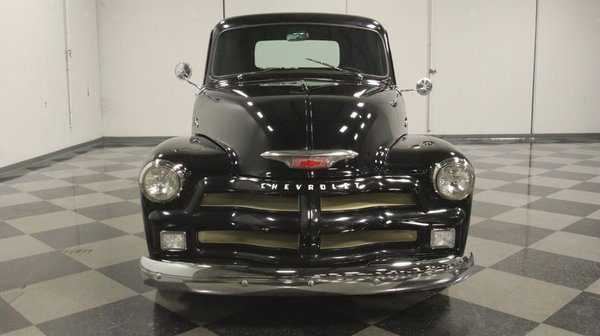 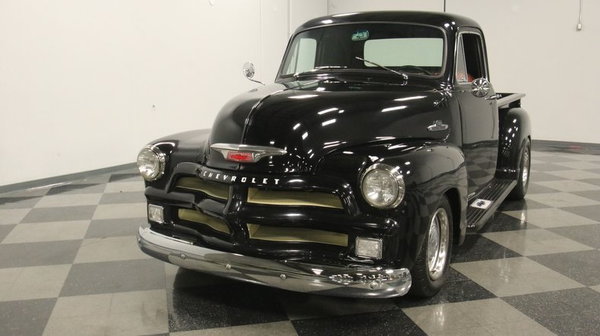 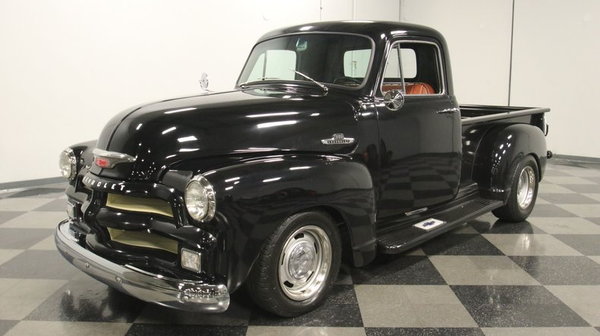 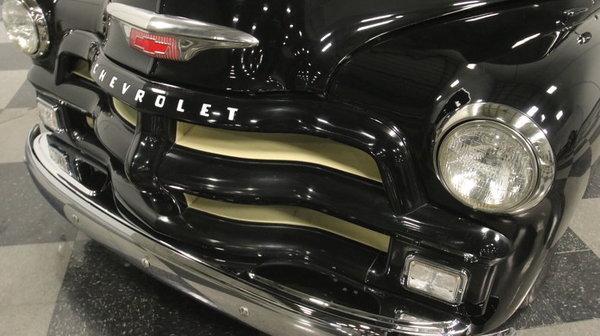 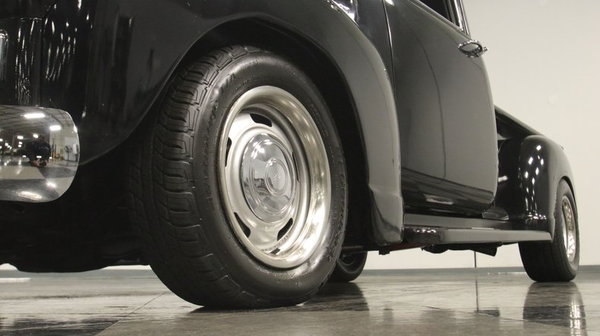 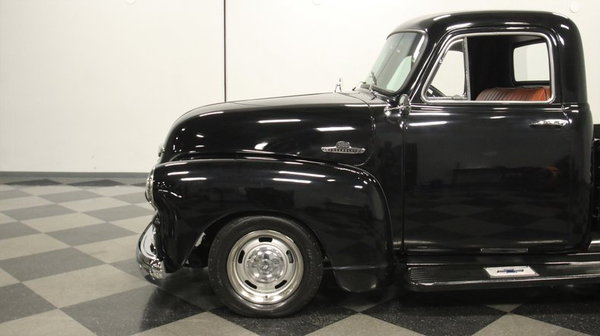 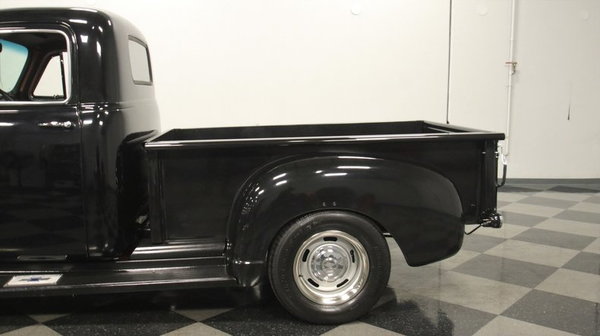 Regular readers know that a lot of vintage pickups run through our doors, but very few of them are as nice as this gorgeous 1954 Chevrolet 3100 3-Window. With slick black paint, an aggressive stance, a built 350 V8, and options like A/C and 4-wheel discs, this vintage pickup is in almost more of a '69 Camaro than a 3100. And with only 18 miles on the frame-off build, this slick hauler is practically brand new.

If you're going to paint it black, you better double down and make it right because you're going to get A LOT of attention. Black paint shows EVERYTHING, so the body and prep work underneath must be up to snuff – which is precisely why the pros that built this 3100 spent countless hours in the body shop blocking and sanding. It was torn apart and reassembled, the cab and bed were remounted on the freshly painted frame, the gaps were set, and the panels were all aligned. Then they sprayed several coats of that sinister black and spent more time wet sanding and buffing it to bring out a great shine. The result is a very straight truck that shows incredibly well in person and although it wasn't finished as a trailer queen with zero flaws, it's still a high-end driver quality rig. The presentation is sleek – no graphics, no flames, no distractions from the clean 3-Window shape that looks flat-out awesome. The original 3100 grille was finished to match the paint – much like the original 3100s of old – although fresh lights and a new chrome bumper and splash guard were incorporated to add flash and set an aggressive tone. The running boards were finished with a protective 'chip-guard' paint, a great idea for any truck that's actually going to be driven, and correct 'Bowtie' step-plates were affixed in case anyone needs to wipe their boots before they get in. All the glass and rubber is new, as are the chrome mirrors and door handles, and the original badges on the hood and painted-on 'Chevrolet' script on the tailgate were properly finished. Chrome tailgate chains were covered with protective sleeves, the rear bumper assembly was deleted to make way for a plate frame, and blue-dot taillights were mounted at the flanks. There was a ton of money spent on the bed, where the inside walls were finished to match the body and expensive and sturdy walnut wood planks were laid down with chrome rub strips to hold them in place. Quite frankly, there's nothing on this truck that wasn't replaced/restored to a high level before being bolted back on, and with so few miles on the build it's all fresh and ready to go.

It's very comfortable inside, thanks to a nicely finished and elegantly simple interior. The original bench has been covered with a tobacco-colored, Ostrich-style upholstery (likely a vinyl/synthetic leather), and with matching door panels and kick panels, it's easy to forget this is an old pickup truck. A sturdy, easy-to-clean vinyl mat was laid down to insulate the floor, and it matches the headliner and cab-lining nicely, plus it's a cinch to clean up. The leather-rimmed chrome steering wheel anchors the cockpit, mounted atop a tilt column to help accommodate taller drivers, while just beyond it a pair of gorgeous VHX digital gauges keep a close eye on the roaring motor under the hood. The dash, steel parts of the doors, and interior pillars were all painted to match the body, and chrome accents on the window sills, door handles, and the column shifter all add contrasting pop to really make the cabin look sleek. The modern R134a A/C system blows ice cold and makes the cab a very comfortable place to be, seatbelts were added for safety, and although there's no radio the amazing soundtrack coming from the exhaust provides plenty of entertainment.

This Chevy still carries Chevy power, via a freshly built 350 V8. With only test and tune miles on the rebuilt engine (the odometer was set from zero after the motor was broken-in, so the 18 miles are 'since built'), it runs superbly and looks fantastic. Reportedly rated at 365HP (and it certainly feels like it has that and more), this hot small block was initially built by a custom shop here in GA to power a 1969 Camaro Z/28, but when a real 302DZ was later sourced for it instead, the drivetrain went into this 3100 instead. Score one for us truck guys, as this beauty now benefits from a built-for-battle, high-revving V8 filled with a thumping cam, new performance internals, and plenty of other go-fast goodies. It's topped with a Holley 4-barrel and Winters aluminum intake, cranks instantly thanks to an HEI ignition and upgraded wiring harness, breathes easy through long-tube headers, and a big aluminum radiator keeps it cool at all times. The slick-black engine bay is ready to be shown off, with Chevy Orange on the motor, chrome valve covers and a matching chrome air cleaner, and chrome brackets/pulleys on the serpentine belt system that drives the accessories. The undercarriage is custom and very clean as well – with a swapped-in '78 Camaro front clip featuring upgraded A-arms and a big sway bar, an '87 Camaro rear end with upgraded air shocks and springs, and power steering system and power 4-wheel disc brakes joining the party. Didn't we say this truck was more Camaro than 3100? It runs and drives great thanks to a smooth-shifting TH400 automatic transmission that spins a heavy-duty 10-bolt-rear end, and it has a killer soundtrack coming from the dual exhaust that turns out just before the rear wheels. That lowered stance is absolutely wicked, set atop a new set of Ralley wheels wrapped in fresh 195/65/15 front and 255/60/15 rear BFGoodrich T/A radials.

Yes, we sell a lot of these. But most don't measure up to the standard set by this Camaro-wannabe. So, if you're looking for a great 3100, call now!
View Full Description