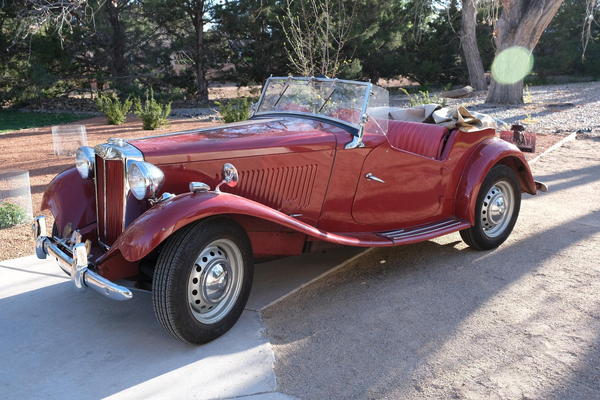 This 1953 MG TD was reportedly acquired 1986. We acquired it in April 2020. The car was refinished in red and features a white convertible top over a red interior. Power is provided by a 1,250cc inline-four paired with a four-speed manual gearbox. Service since 2013 includes transmission repair, and the replacement of the battery, battery cables, and the brake master cylinder. This TD is offered with service records and a clean Arizona title in the seller’s name.

The car was reportedly repainted red after a fire during previous ownership. Exterior features include chrome bumpers, integrated running boards, a trunk-mounted spare tire, and a luggage rack. The hood latching mechanism was repaired in March 2015,

The 15″ steel wheels were powder coated in August 2011 and wear polished MG hub caps and Nankang tires. The brake master cylinder was replaced in March 2020, and the seller notes that the wheel cylinders are corroded and in need of replacement.

The interior is trimmed in red vinyl with matching door panels and black carpeting. The seats consist of a fixed backrest and individually sliding bottom cushions. Lap belts are equipped for both driver and passenger.

The banjo-style steering wheel fronts a red dash fascia housing a 100-mph speedometer, a 6k-rpm tachometer, and auxiliary gauges for oil pressure, water temperature, and amperage. The five-digit odometer shows 68k miles, approximately 500 of which were added by the seller.

The 1,250cc inline-four features dual carburetors, polished air filter housings, and a polished valve cover. The four-speed manual transmission was rebuilt in 2002 and repaired again in March 2013. The battery and battery cables were replaced in March 2015.

Really enjoyed this car even though we only had it for a short time. Life changes, and we are moving and must find a good home for it. What a fun car. We will miss it.

Many more photos available upon request.