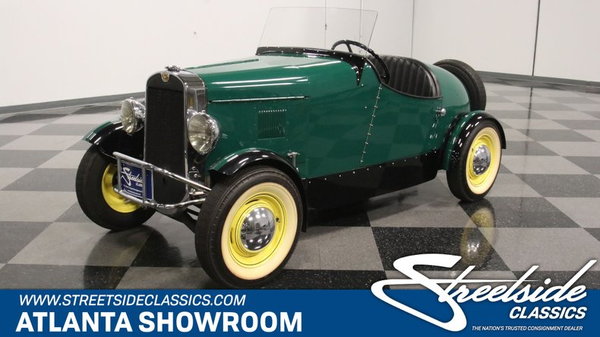 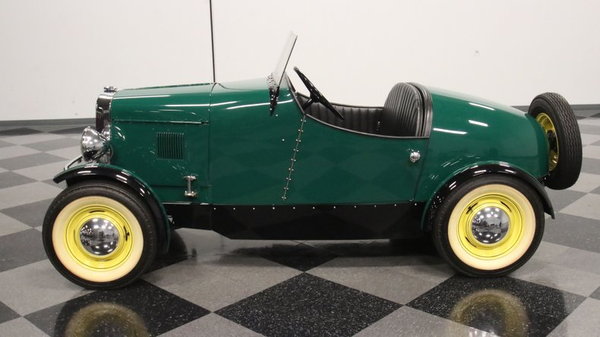 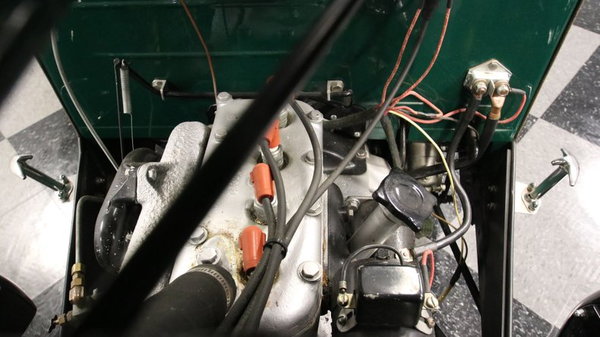 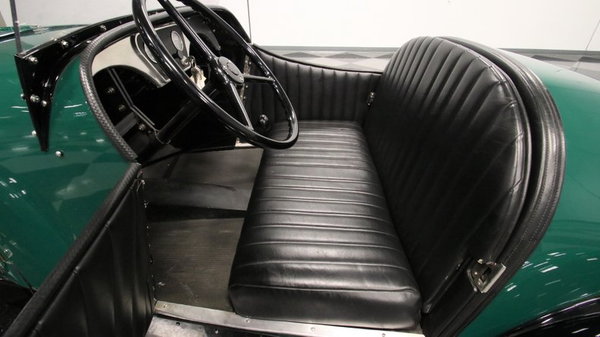 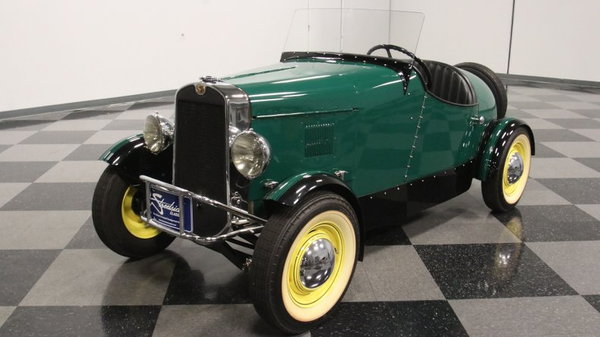 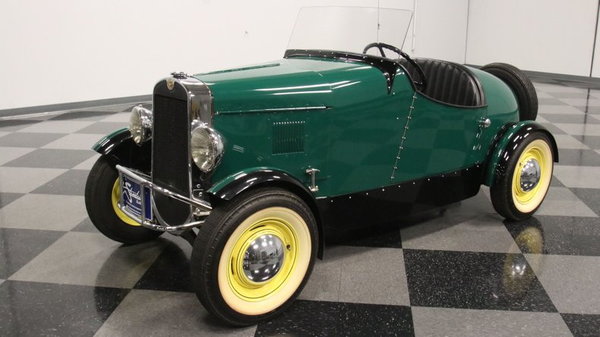 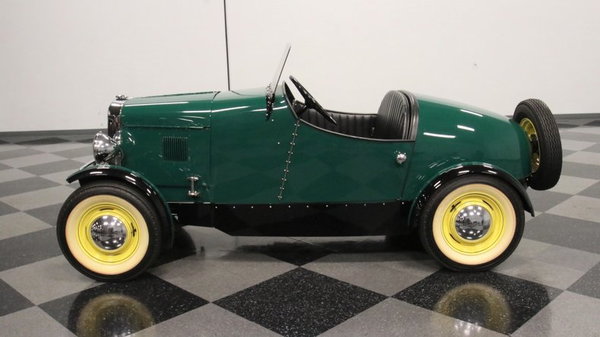 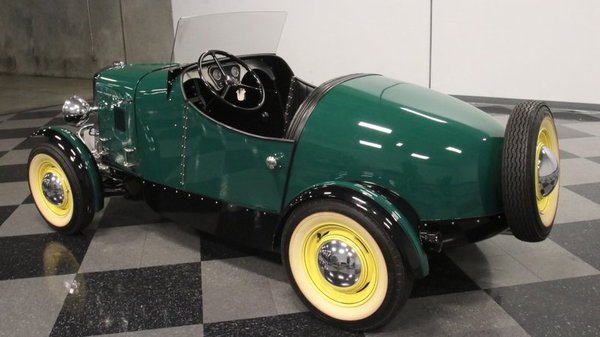 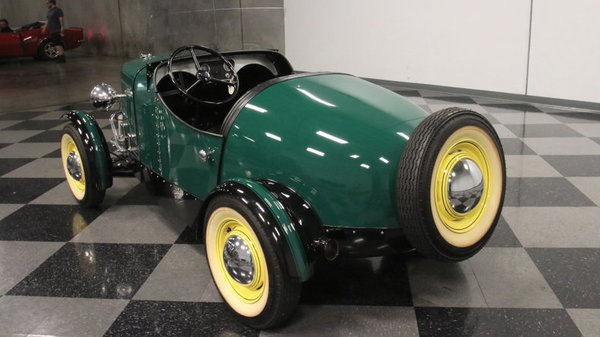 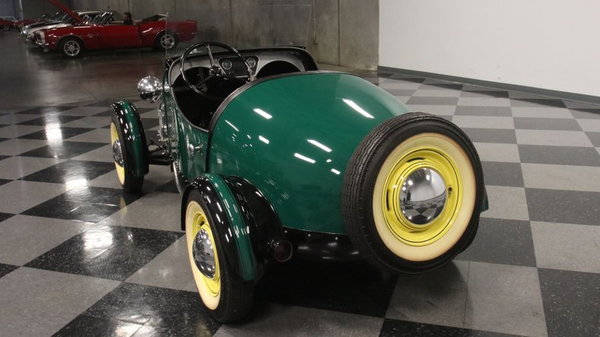 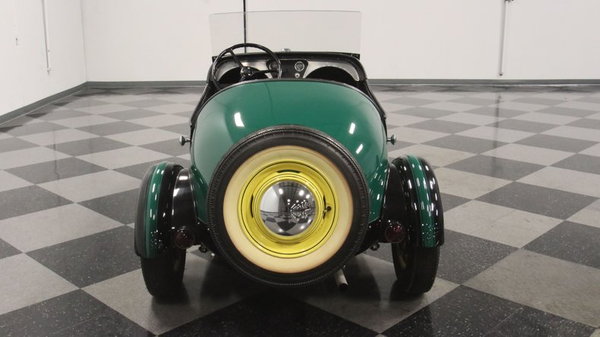 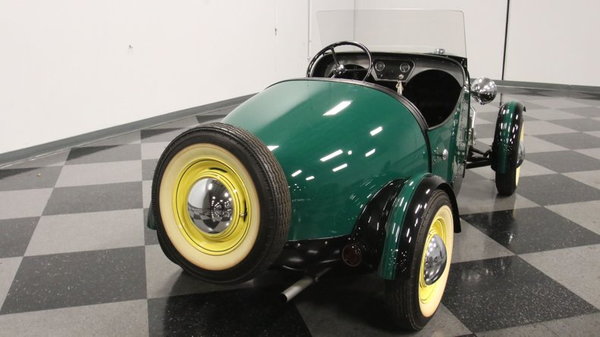 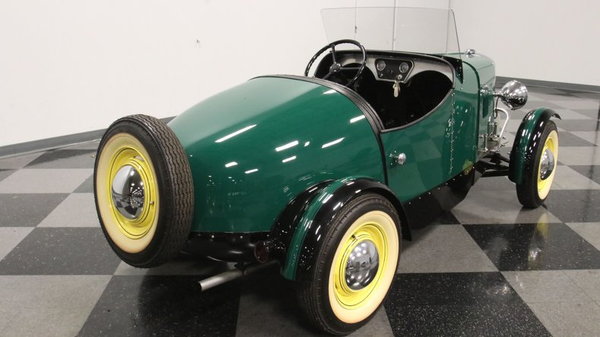 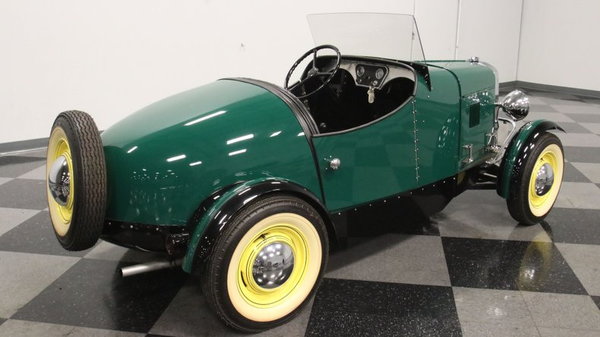 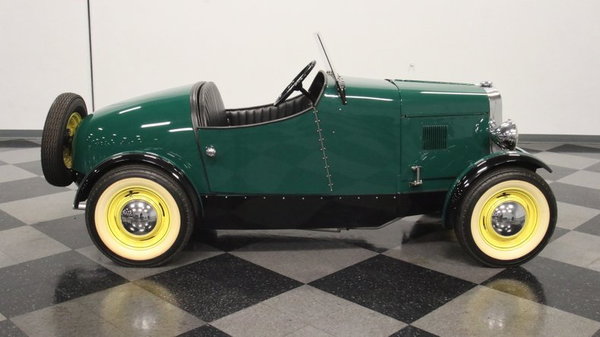 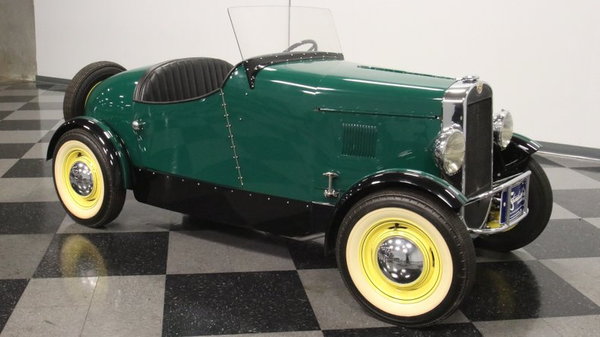 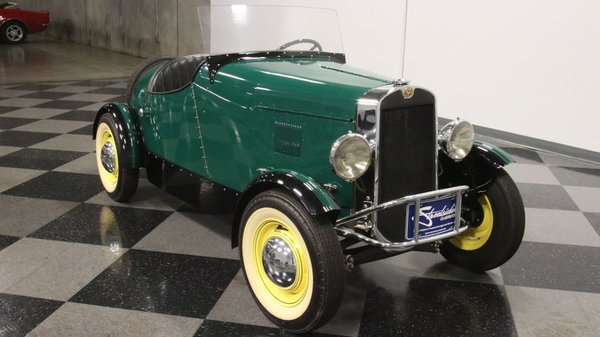 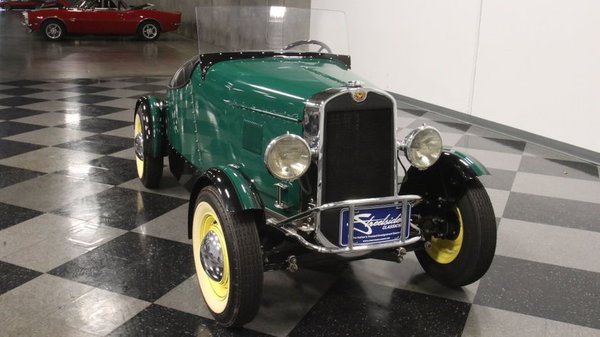 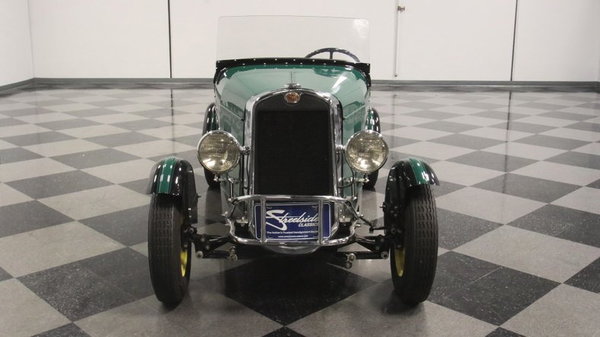 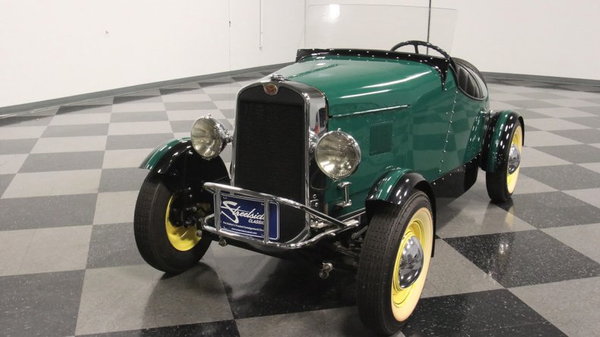 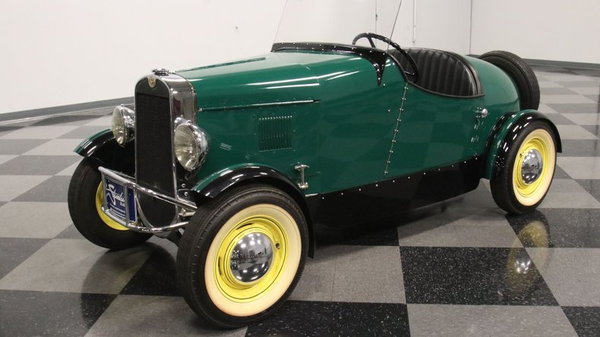 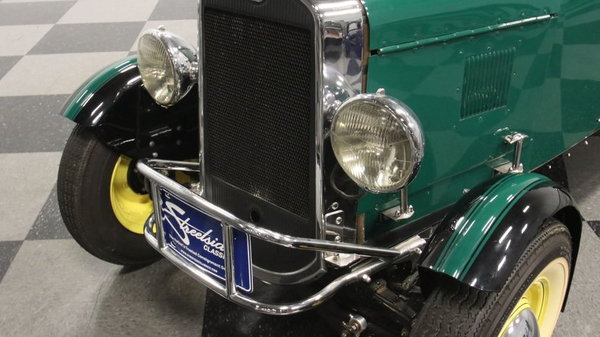 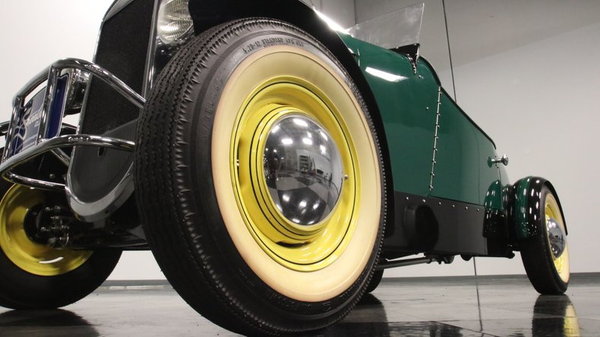 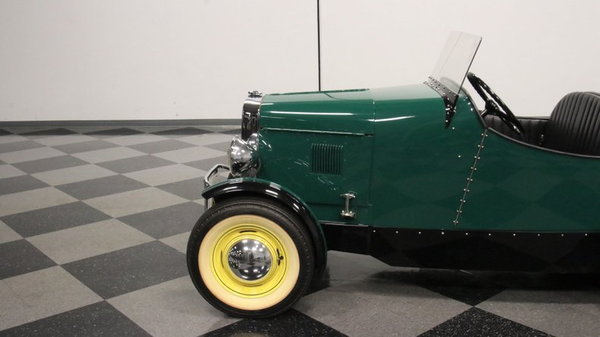 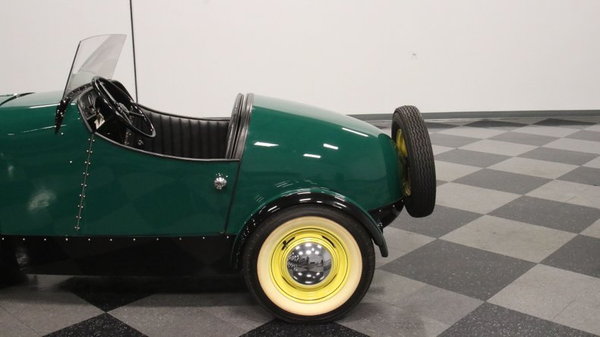 This 1937 Austin Boattail Speedster is a truly cool classic. It not only has an interesting American and European heritage, but also it's a top-quality build with a distinct and sleek style. And we're even told a story on this of being a prototype where you'll only need your hands to count its rarity.

This car has a beautiful look that instantly attracts attention. We're told there was over 2,000 hours in its restoration, and the quality presentation seems to be the proof. The panels lineup nicely starting at the grille, and then moving all the way down the body until you reach the distinct rounded end. As a true roadster, there is a minimalist attitude, and so the elegance is in the details. The cycle fenders have a two-tone look to coordinate with the green body and lower black frame. And the yellow wheels are also part for the color coordination with distinctive green pinstriping. If you're not familiar with American Austin, it started out as the Pennsylvania firm that set out to build an Americanized version of the Britain's Austin 7. American Austin had a tough time finding too much traction here, because the small car that put much of the world on wheels was not quite the right size for the USA. However, one way to really get attention is a sports roadster with a sleek rear that paid tribute to the best cars from celebrated automakers like Auburn and Mercedes. This has previously been sold under the story that it's a 1 of 6 prototype built right before the Bantam era. Over eight decades later, it is the only one that remains. While these claims have not been fully verified, it's an exceptionally interesting story that gives you the potential of owning a true classic that has no other like it left in the world.

The interior is clean, simple, and functional - just like a proper roadster should be. The restoration was not about adding comforts that came in the post- WWII era, and instead the money was spent in getting feeling fresh and correct. The bench seat contours to the rear's unique form, the side panels match the seat upholstery, and the big steering wheel feels grippy in your hands. So you really get the classic roadster experience. Every detail seems to be in place, right down to the Stewart Warner gauges (they're an institution that have been making readouts for well over a century.)

Just like the rest of the car, the engine bay is ready to be shown off. This is not about being overly flashy with polished components. Instead, it's impressive for an almost factory-fresh look with the clean/bright block, tidy wires, and correct component that even still clearly have their tin tags. The roadster is a more ideal paring for the Austin's 750cc motor and three-speed maul transmission. After all, one of the reasons the Austin 7 was so successful is this hardy powerplant, and so the lightweight setup makes this both a rugged and nippy machine. And as you look at the undercarriage photos, you'll see a clean and panted chassis that was taken back to a day-one kind of status.

There was a lot of time, effort, and investment to get this rare American Austin looking so distinct. So if you want to own the small car that will steal big attention at the car shows, don't miss this roadster. Call today!!!
View Full Description