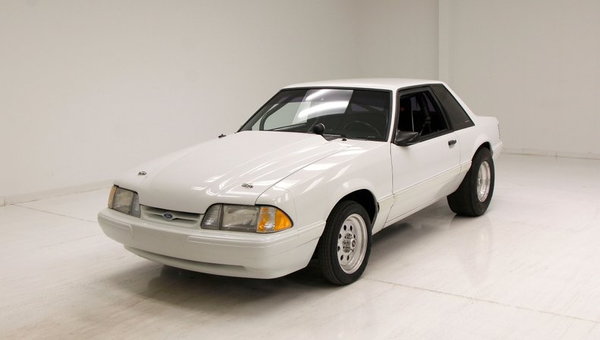 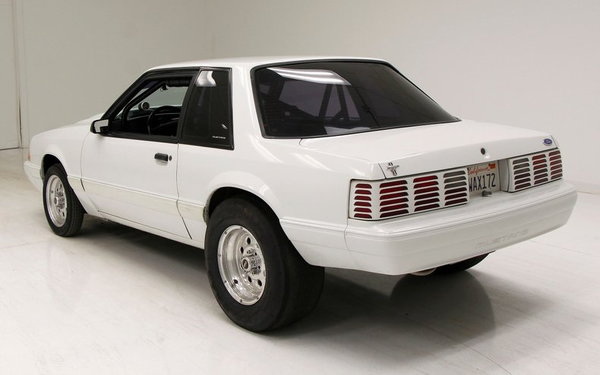 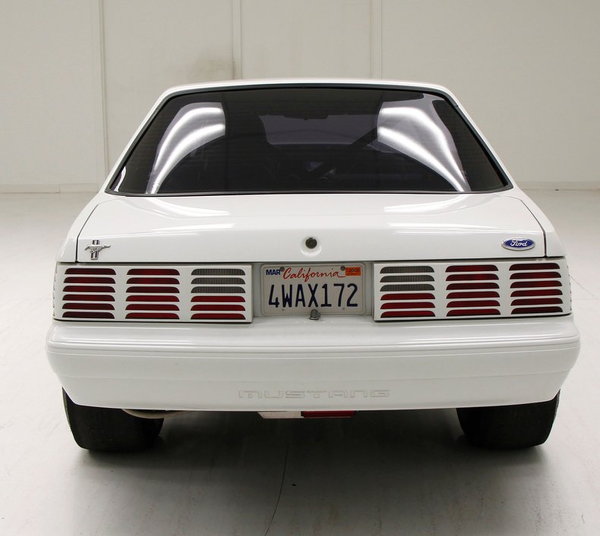 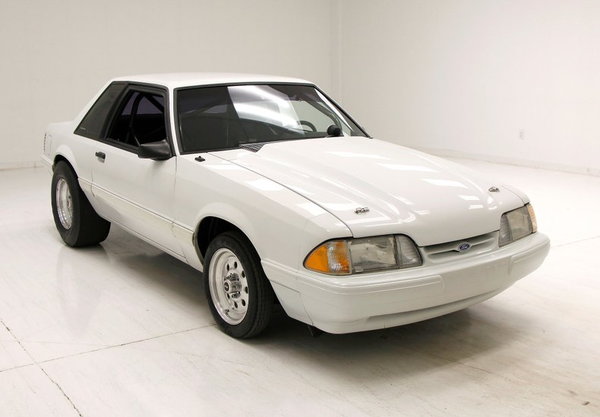 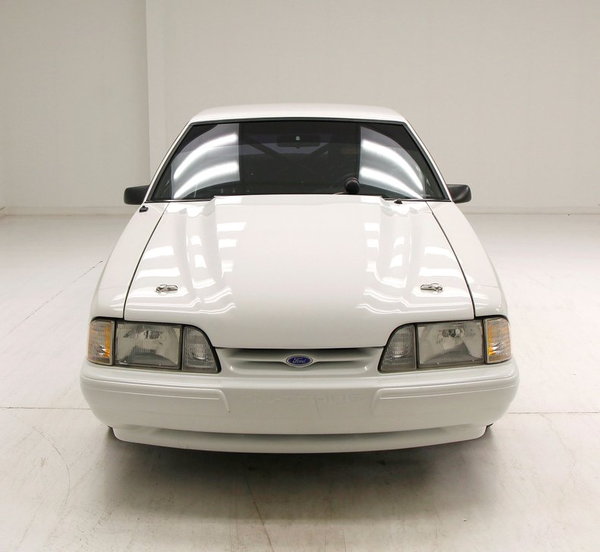 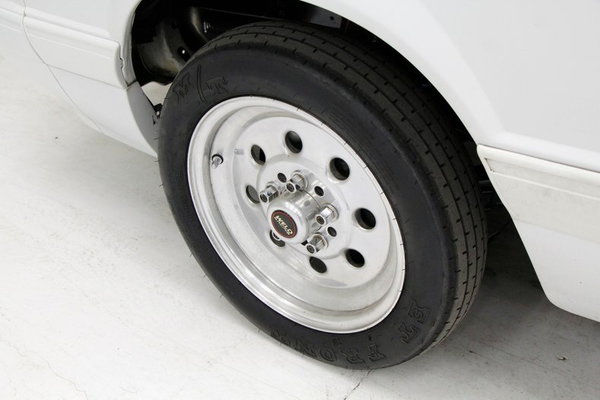 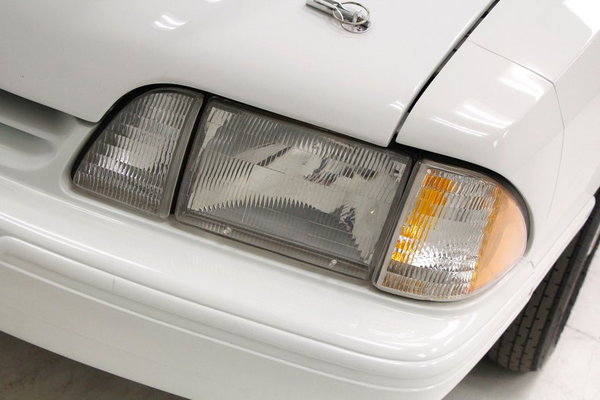 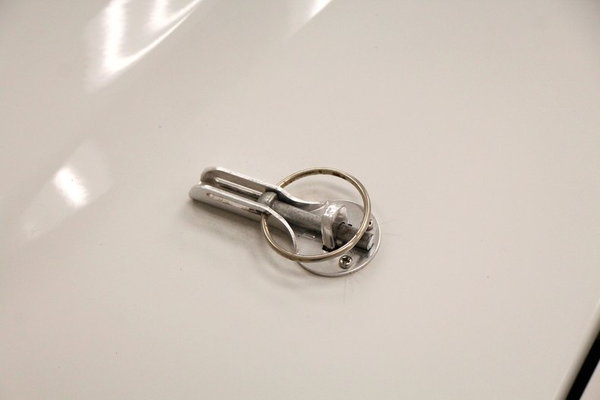 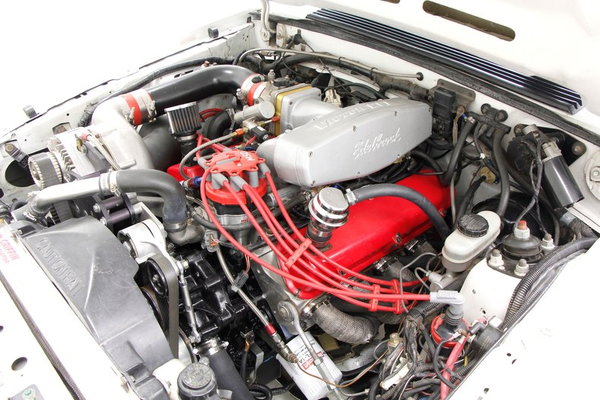 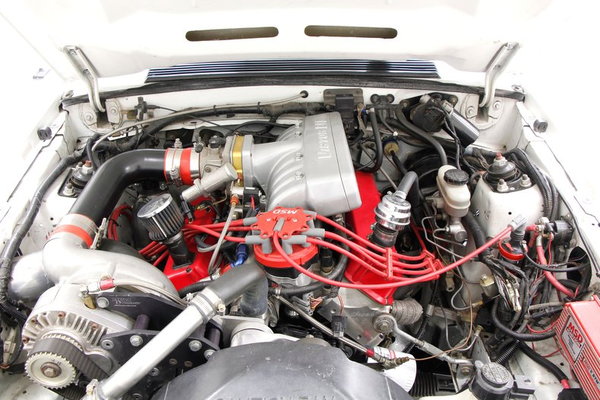 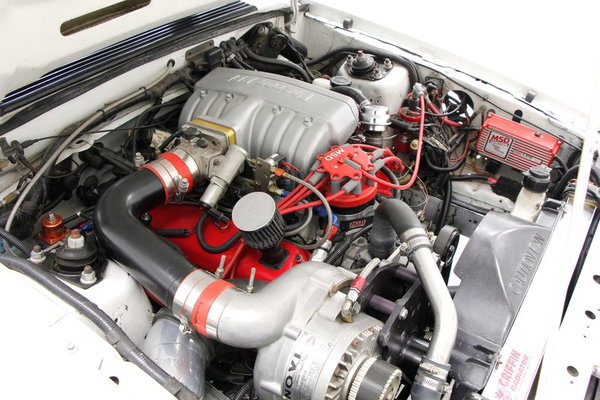 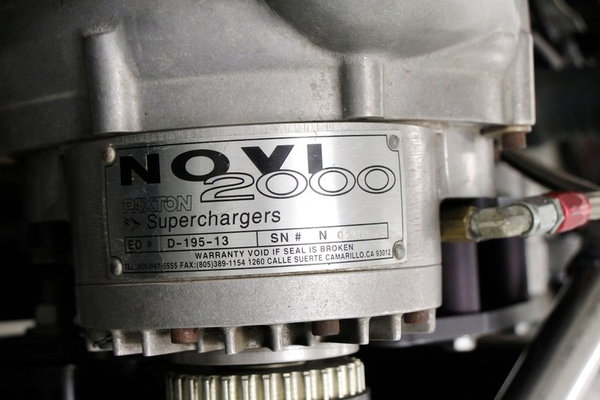 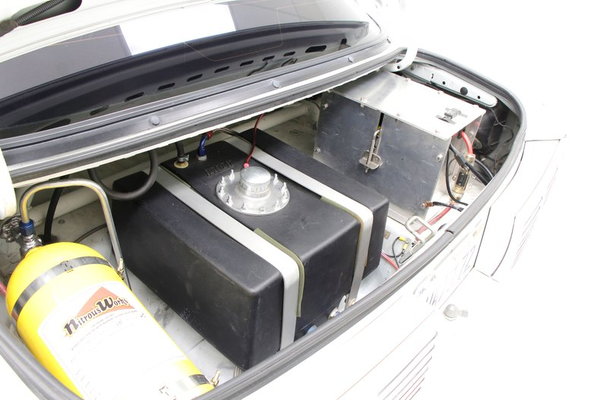 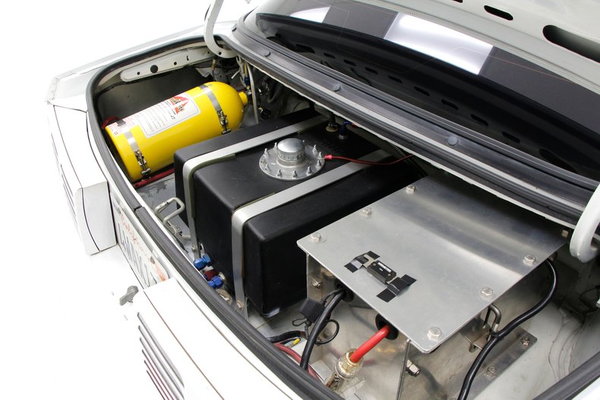 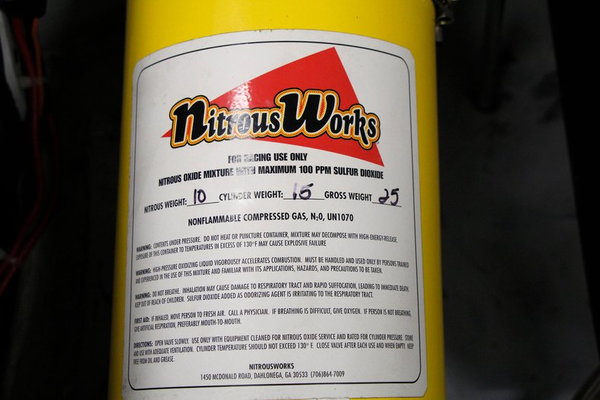 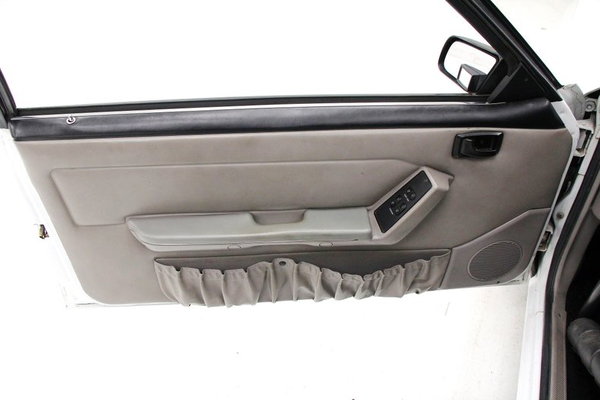 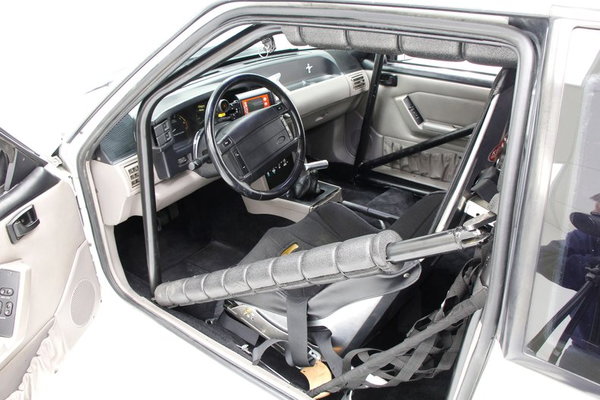 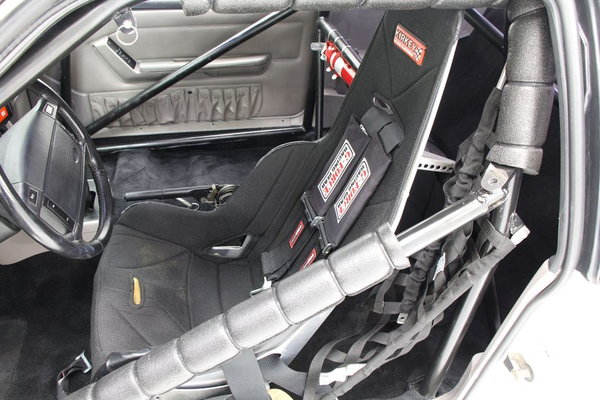 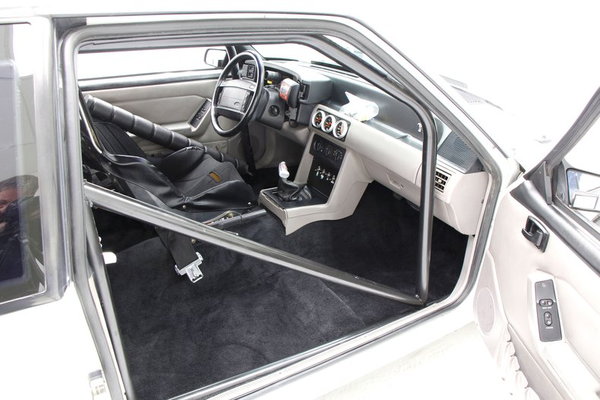 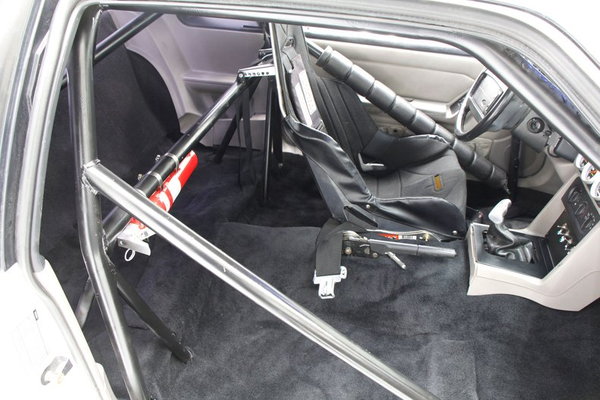 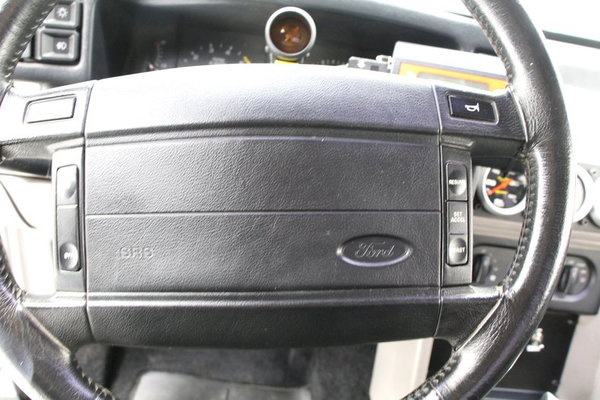 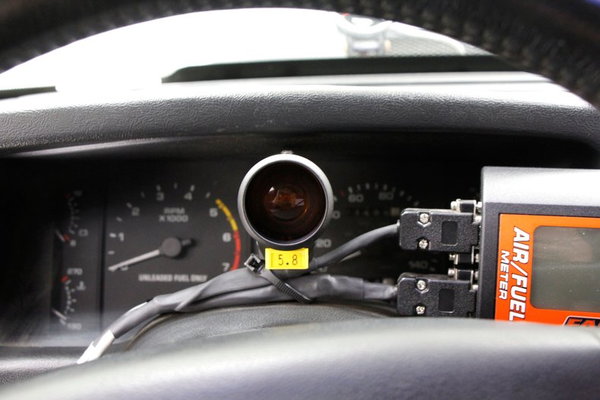 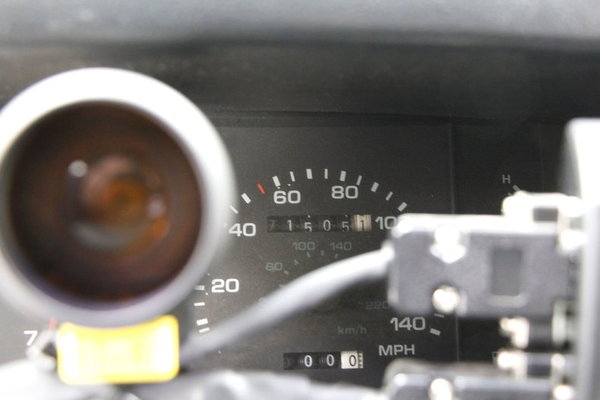 Contrary to popular belief, there is no such thing as a 1964½ Mustang. Starting from serial No. #001 - the car inadvertently sold to Stanley Tucker - all the cars produced had 1965 VIN codes. There is a gap of 80,000 to 100,000 in the 1965 VINs around June-July 1964 that coincides with the switch from a generator on the engines to an alternator. The gap is considered by many Mustang aficionados to be the dividing line between '64½ and '65 models.

For consignment a car that has not seen the street, just the track since 1998. With a new engine with speed and power upgrades a plenty, this car is now a pocket rocket Foxbody Stang, with a sting. A balanced and blueprinted Dart Sportsman blocked 347ci engine now graces the bay, along with an aluminum Kirby racing seat, and Weld Draglite wheels with MT ET drag tires front and rear. Street lethal if you will.

Exterior
This specialized coupe is painted in Oxford White and has straight steel panels which mind their gaps. Body matching integrated front bumper, tinted windows with black surrounds, and some rectangular headlights, are framed by a fairly unassuming Cobra R style hood with pins to secure it. Cheese grater style wraparound taillights are just below the rear trunk deck, and above another body matching rear bumper. Weld Draglite racing wheels are on all 4 corners, and up front wrapped by skinny 22.5x4.5x15 tires, and one the rear 28x10.5x15 rear drag rubber. Save for the drag wheels and tires, and the Cobra R hood, this is a naturally occurring unassuming Fox Bodied Mustang LX. BUT!

Interior
Framed with a 10-point Alston Chassis Works roll cage, a Kirkey carbon aluminum racing seat with 5-point belts, and a litany of important monitoring gauges, and level indicators, all for the straight line. New black carpet covers all areas where seats once were but now just weight loss for this super 'Stang. The steering wheel airbag is still there on the original steering wheel, and an air/fuel monitor and shift light has been added. A B&M shifter sits directly in front of the dash and is within reach for the tire spinning.

Drivetrain
The 347ci V8 Dart Sportsman engine block has all the fixings and has been meticulously built by Keith Kraft Engine builders. This block is adorned with Edelbrock Victor Jr. race heads with a stage 3 port and polish and Jesel Shaft mount 1.7 roller rockers, 1-3/4 inch port matched long tube headers to exhaust ports, a Novi 2000 Supercharger @ 18psi boost, a wet nitrous system, and a Fast dual wideband air/fuel monitor are there and in charge. An Edelbrock Victor EFI intake port matched to the heads, has 50lb MSD injectors, Pro-M 105mm MAF, an Edelbrock 75mm throttle body, and an Aeromotice full race fuel system are also attached. On back is a Tremec 3550 Liberty shifted 5-speed manual, a Lakewood blow-proof bell housing, a Spec Stage 3 clutch (26 spline), a Spec billet aluminum flywheel and an aluminum driveshaft with safety loop. Out back is a spooled Currie Ford 9-inch Track 9 rear with a 3.70 gear, and Moser 31 spline race axles. Sheesh! I'm sweating with anticipation on the test track, which will be a straight-line version today! Buckle up! In the trunk a new RCI racing 10-gallon fuel cell, the NOS tank, and the battery box all neatly buttoned up and inline for easy access.

Undercarriage
An Alston Chassis Works fully adjustable rear suspension with coil over rear shock and spring conversion, adjustable anti roll bar, welded in sub frame connectors. Up front Lakewood 90/10 front shocks, and Eibach front drag springs. Edelbrock race water pump feeding a Griffin large core radiator. We note battle boxes welded in to give some extra stiffening to the factory torque boxes. All neatly put together and topped off with a 3" Mac Pro Chamber and race muffler setup exiting just prior to the rear location underneath.

Drive-Ability
It fires up with a thunderous roar, and our test driver who doubles as my sidekick decoder took her for a spin, and spin it did, especially for the rear tires. He said launching was awesome, and of course did not get close to any top speed, but it is reported it goes like hell. Dyno sheets are included from the old stock block set up which produced 535hp and now with this engine build this beast will surely make close to 700hp.

Take a Fox body and spend 70K on it to make it go straight, and you now have a super 'Stang, a Muscle Mustang, and a powerful pony. No stone left unturned on this one, an excellent build with super quality parts, and all for 1 purpose to smoke the competition on the straight line. Mission accomplished...this description will self-destruct in 10 seconds!
View Full Description