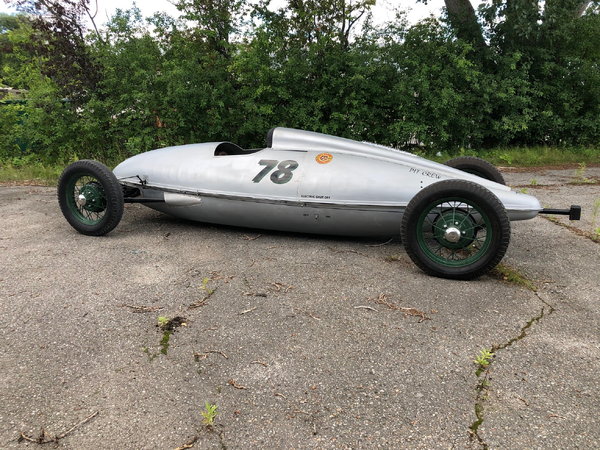 We purchased this Belly Tank Racer in December 2019 from a local, amateur Hot Rod builder. He bought the belly tank in 2015 of the estate of a fellow that intended to build in up as a Bonneville racer. The belly tank is fiberglass taken off an original aluminum belly tank as a mold. He then was able to buy a Ford Model A chassis and drive train. He decided to marry the two. He designed an made up the frame and gas tank and adapted bits and pieces to construct the frame to fit the Model A engine and transmission. The Model A Running gear he believed was late 20’s but he added a 1932 distributor in order to get mechanical advance. He completely rebuilt the engine and it runs very well. The transmission has straight cut gears so you double clutch to start off then speed shift after that. It is a 3 speed transmission with reverse. He used a 1948 Ford steering box and adapted it to the Model A steering system. He found an aircraft ejector seat and belts and used them. It currently has no water pump so get hot if not moving. He installed small fan, located under the driveshaft to move the fumes out of tank while driving it. As it is not road legal he only drove it around his property to entertain his grandchildren. We purchased it to film on an episode of our TV show “Restoration Garage” Now that the filming has completed the Belly Tank is up for sale. It will be sold under a Bill of Sale. No title with vehicle. Off road purposes only.
View Full Description